The Kogi State Ministry of Education, Science and Technology, on Tuesday organised a send-off session for her outgone Permanent Secretary, Pastor Emmanuel Idenyi and two Directors who recently retired from the Ministry. 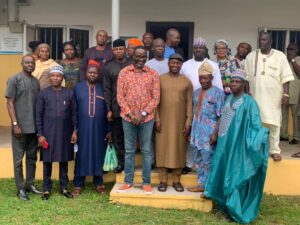 It was a gathering demonstrative of praises and goodwill messages for the three retirees as they got affectionate valedictory from their colleagues from the Ministry of Education as well as other MDAs and family members.

Speaking at event, the Ministry’s Commissioner, Hon. Wemi Jones, FCIB, commended the three celebrants for their hard work and commitment towards the development of education sector in the state while in active service.

The commissioner specifically eulogised the outgone Permanent Secretary, Pastor Emmanuel Idenyi, for being a very dependable and reliable ally with a high sense of humility and respect.

Jones described the Permanent Secretary as a responsible, dedicated, punctual and loyal civil servant, while commending the management and staff of the Ministry for their support and commitments to duty.

He stressed that the cordial working relationship and harmonious working environment in the Ministry coupled with the necessary support provided by the state government, brought about the unprecedented transformational development witnessed in the state‘s education sector under his watch.

He appreciated His Excellency, Governor Yahaya Bello, for creating an enabling environment and giving all the needed support and encouragement to carry out the Ministry’s functions without any form of interference.

He highlighted the achievements of the Ministry within the period of his service to include a fully enacted State Education Law, improvement in WAEC ranking from 28th to 14th, drastic reduction in examination malpractices to almost zero level, and successful establishment of Education Strategic Plans.

Other achievements include: approval for recruitment of 3900 secondary school teachers, facelift of the Ministry, partial automation of internal examination registration process, among others.

He also commended the two retiring Directors for giving their best towards the development of education in the state, while assuring them of open doors for continual consultation even after retirement.

The commissioner congratulated the celebrants for their years of meritorious and selfless services, and prayed God to continue to guide them in all their future endeavours.

He however challenged the new Permanent Secretary in the Ministry, Alhaji Yakubu Dele Musa, to step into the big shoes his predecessor left behind, and ensure that he surpassed his feats.

The Ministry presented gifts to the retirees in appreciation of their contributions towards the development of education in the state.

In their separate responses, the new senior citizens expressed their heartfelt gratitude to the Commissioner and the entire management and staff of the Ministry for the honour bestowed on them.

Pastor Idenyi thanked the Commissioner for the trust he reposed in him and the harmonious working relationship he enjoyed under his leadership, describing the Commissioner as a great leader.

Idenyi extended his appreciation to the Governor for the opportunity given to him to serve as a Permanent Secretary especially in the education sector.

He thanked the management and staff of the Ministry for their unalloyed support and commitments to duty which resulted into the tremendous achievements recorded under his tenure as the education Permanent Secretary.

The two retired Directors; Abah and Suleiman, in turn thanked the Commissioner, the management and staff of the Ministry for their cooperation while in service and the honour done them at retirement.