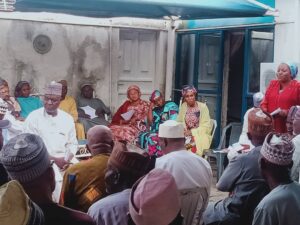 The Chairman of the Bola Ahmed Tinubu BAT Vanguard Minna branch Alhaji Mohammed Abubakar Katcha disclosed this in a meeting of all the twenty five local government Chairmen and their members in Minna recently.

Abubakar Katcha told members of the Vanguard that the meeting was called to appraise the outcome of the  APC Presidential primary election “which Senator Bola Ahmed Tinubu won, we thank God that we are part of this victory”.

Alhaji Katcha mentioned that he will lead a high powered team to congratulate Him in addition to setting up a committee to carry the Tinubu Presidency project to all the nook and crannies of the state.

He used the forum to remind the entire people in the state the need to have their PVC ready before the election date, adding that those who don’t have should collect theirs.

He observed that if really they want him to succeed they must have their PVC and should start canversing support for him now.

“We are sure Senator Tinubu will win the election with a landslide but we should not be complacent” Katcha declared.

He then declared that they shall do everything possible to deliver the entire Niger state comes 2023 general election.