The three Members of the Kogi State House of Assembly on suspension have been barred from all activities of the Assembly until investigation is concluded on there alleged involvement in forgery. 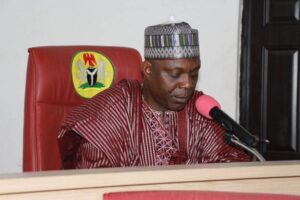 The three lawmakers, Hon. Ahmed Ahmed, Hon. Abdullahi Bello, Hon. Moses Ododo were accused of using the signatures of members meant to pass confidence votes on Gov. Yahaya Bello during his Presidential aspiration for other purposes, described it as forgery.

The Speaker of the Assembly, Rt. Hon. Matthew Kolawole made the disclosure at a sitting of the House today in Lokoja, also barred the suspended members from holding Chairmanship and Vice Chairmanship of any of the House Committees.

Speaking individually, the members said the signatures as contained in the purported impeachment notice said to have been served the speaker, Kogi State House of Assembly, Rt, Hon. Matthew Kolawole were signatures meant to pass a vote of confidence on Gov. Yahaya Bello during his aspiration to be the nation’s President.

This was the summation of Members of the Kogi State House of Assembly when they individually spoke on the floor of the House.

Those who’s signatures were contained in the purported impeachment notice all disclosed that there signatures was aimed at supporting the Presidential aspiration of Gov. Yahaya Bello before the primary.

The members said the signature was supposed to be a communique issued to show members confidence in Gov. Bello’s ability to preside over the country.

The members said the House held a meeting in Abuja where they unanimously agreed to support the Presidential aspiration of Gov. Yahaya Bello, lamented that the former Deputy Speaker and Majority Leader, Deputy Chief Whip who headed the communique drafting committee could use the signatures as a tool for impeachment.

The House described the actions of the former Principal Officers as a shame, urged them even though they are on suspension, to do an apology letter to the House.

The House condemned the action of lawmakers to go to the social media to discredit what the house has achieved over the years, said the communique asked to be issued by the three suspended lawmakers was a vote of confidence in support of the Presidential aspiration of Gov Yahaya Bello before the primary.