1.0          INTRODUCTION
The CLEEN Foundation implemented several interventions for the peaceful conduct of the June 18 2022 Governorship Election in Ekiti State. 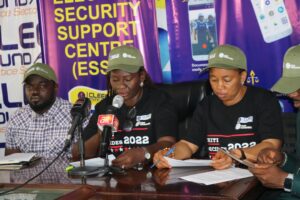 These include among others: Conduct of Pre-Election Security Threat Assessment in Ekiti State, Coordination of Virtual Sessions on Election Security Management, Recruitment, Training and Deployment of Citizen Observers to observe the conduct of security personnel deployed on election duty. Others are the coordination of Election Security Support Centre (ESSC) to provide real time updates on election security during the election and issuance of a a preliminary statement on its observations on the election day.
This press release is the post-election statement of CLEEN Foundation on the 2022 Governorship Election in Ekiti State which was a test case for the Independent National Electoral Commission and other critical actors and their preparations for the 2023 General Elections in Nigeria.
2.0  METHODOLOGY
The CLEEN Foundation Election Security Support Centre (ESSC) tracked, monitored, documented, escalated and followed up on security-related developments across the sixteen (16) LGAs of Ekiti State where our citizens observers were deployed. We also deployed the “CLEEN Mobile App” which allows our observers to report security and other related issues in their respective areas of observation. The primary data collected from the CLEEN Foundation citizen observers were complemented with credible and reliable information from other sources. The following issues are highlighted as part of our main report on the 2022 Ekiti State Governorship Election.
3.0  OPENING OF POLLS:
Reports obtained from our Citizen Observers across the sixteen (16) Local Government Areas in Ekiti State indicated that in 85% of the Polling Units covered, INEC officials were reported to be present as at 07:30 am, while polls commenced at about 8:00am.
4.0  SECURITY RELATED OBSERVATIONS
4.1  Early Arrival of Security Personnel:
CLEEN Foundation observed remarkable improvement in early arrivals of security personnel to the polling units. Specificially,97% of security personnel on election duty arrived at the polling units before 8:00am. Only 3 % arrived at 9: 00 am or later.

5.0. General Observations
5.1  Deployment of INEC Officials:
CLEEN Foundation observed early arrival and setting up of polling units before 7.30 am in almost all the Local Government Areas of the state where CLEEN citizens observers were stationed.
5.2  Conduct of INEC Adhoc Officials:
We observed that INEC Staff and Adhoc officials were professional and went about their duties with a high sense of professionalism and responsibility. It is worthy of note that they gave priority to the elderly, pregnant women and persons with disability.
5.3  Vote Trading:
CLEEN observed an improvement against voter inducement. Pockets of vote trading were observed by our observers during the process ranging from 2,000 to 10,000 Naira. For instance, at PU 003, Ward D, Arokodare, Ijero LGA, incidences of vote trading were recorded. Party agents were seen inducing voters in favour of their parties, tallies were handed over to them as a form of cheque to be cashed out at an unidentified location. Also, in Ekiti-West LGA, PU 09, Ward 7 Ipole-Iloro, there was a collaboration between security and party agents to induce voters with money. However, at PU 02 Ilawe, Ward 1, Ekiti-South West LGA, fighting broke out at the polling unit because voters rejected money from party thugs. A similar incident also occurred at PU 003, ward D in Ijero LGA.
5.4  Over Voting:
CLEEN Foundation observed that in PU 006, Ward 7 Ogbon Titun I and II/Ipara Igbagbo/Oke Oniyo incidents of over-voting were recorded as total accredited voters were 306, while total votes cast were 310 leaving a variance (over voting) of 4. Party agents agreed to cancel the entire votes cast in the polling unit.
5.5  Inclusivity/Priority Voting:
CLEEN Foundation observed that INEC gave priority to the elderly, pregnant women and persons with disability in the process. For instance, in Ijero LGA, Arokodare, Ward D, PU 003; Ward Ipole-Iloro 07, PU 09, Ekiti West; Ward, Ilawe 002, PU 014, Ekiti South West, the elderly and pregnant women voted first. However, in Ekiti South-West LGA, Ward 8, PU 12; PU 2, Ward B, Ijero LGA  nursing mothers were not given priority voting. Also noted was the improved participation of women and youth in the electoral process.

5.6  Functionality of BVAS:
CLEEN Foundation observed widely, the compliance of INEC’s Adhoc staff with the use of Bimodal Voter Accreditation System (BVAS) for accreditation. More so, we noted an improvement in the functionality of the BVAS which was widely used across all polling units. However, in Moba LGA, Igogo ward 2 PU 016; 017 and 018; PU 007, Ward Otun 3, Moba LGA the BVAS malfunctioned as both fingerprint and facial recognition failed, while in PU 08 Akeju Street, Ward 9, Ado LGA card verification failed and facial recognition was used. In Ekiti East LGA, Ward 6, PU4, Obadore 1, Omuo-Ekiti, Ekiti-East LGA and at Ikere, Ward 10, PU 14, all had issues of BVAS not functioning optimally . These issues were escalated to INEC and resolved timely.
5.7  Conduct of Party Agents:
CLEEN Foundation noticed the interference of party agents in the polls, for instance in PU 003, Ward 09, Gbonyin LGA, voting was disrupted by party agents, in PU 006, Ward 09, Irepodun/Ifelodun LGA, party agents were noticed trying to influence the elderly by trying to assist them in voting.  Also in PU 003 Arokodare, Ward D, Ijero LGA, party agents disrupted voting by influencing the decisions of voters and when the security agencies tried to intervene it brought about disorderliness.
5.8 Accountability and Transparency of Election Results:
CLEEN Foundation observed that the Independent National Electoral Commission result portal received all the 2445 polling unit results which were accessible by the general public. This reduced the tension and violence usually experienced at the collation centres in previous elections.
6.0  Conclusion and Recommendations:
CLEEN Foundation congratulates the good people of Ekiti State for defying the odds and coming out en-mass to exercise their franchise peacefully. CLEEN Foundation commends security agencies led by the Nigeria Police Force for the conduct of its security personnel. The election was widely adjudged to be peaceful which aligns with the findings of our Election Security Threat Assessment (ESTA).
CLEEN also commends the Independent National Electoral Commission for the noticeable improvement in the conduct of the Ekiti State Governorship Election especially the near absence of logistics challenges that has been a major issue in the conduct of our elections. CLEEN Foundation calls on INEC, security agencies and CSOs to continue to maintain the level of synergy, partnership and professionalism it has shown in the Ekiti State Governorship Election. CLEEN also notes that there is more to be done ahead of the 2023 General Elections and  if we are to build on the successes recorded the following recommendations need to be addressed by all duty bearers;
6.1  Security Agencies
Security agencies should ensure that electoral offenders are properly investigated and prosecuted to serve as a deterrent to others
There isneed for regular training and retraining of security agencies on their roles and responsibilities in the electoral process in the electoral process.
6.2  INEC
The commission should ensure sustained improvement in the distribution of election materials in polling units in subsequent elections as this will contribute to instilling confidence in the process amongst voters.
Should sustain awareness creation and voters’ education especially in communities.
Should ensure training and retraining of electoral officers to enable them meet up with the challenging needs of the electorates in Nigeria, especially in understanding the provisions of the newly amended Electoral Act (2020) and other INEC legal frameworks and guidelines.
Should ensure that all electoral offenders are investigated and prosecuted working with security agencies.
6.3  Politicians
Should maintain the peace, be magnanimous in victory and work with the good people of Ekiti State including those in the opposition parties to make the state better for all.
Should shun vote trading and any form of voter inducement as it is a criminal offence as enshrined in relevant legal frameworks.
6.4 Federal Government
The Federal Government agencies especially the National Orientation Agency should ensure general awareness creation on the importance of civic participation by eligible citizens and the need to eschew vote trading and electoral violence by all actors involved.