The Ibo community in Ganaja and all the surrounding communities, in Ajaokuta Local Government Area, have endorsed Engr. Abubakar Ohere for Kogi central Senate, ahead of the 2023 general election in Nigeria. 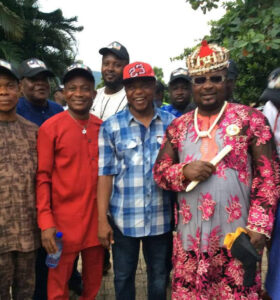 The entire Ibo stakeholders, comprising of chairmen of Ibo states, the Igwe’s of Ibo communities and major marketers and business owners who addressed the gathering yesterday stated that Sanni Abdulraheem’S great antecedents and his contribution to humanity, especially all his physical developmental strides in Ganaja and all other surrounding communities are glaring and visible to everybody, hence, the need to support him to win the forthcoming election for a better representation.

Responding, Barr. Sanni Abdulraheem thanked the entire Ibo Community in Kogi state, a people he described as “the economic engine room of Nigeria”, stating that the government of Alhaji Yahaya Adoza Bello in kogi state has always engaged in a smooth working relationship with the people of kogi state and the Ibo community, appointing an Ibo indigene as Special Adviser to Kogi State government.

“It is worthy of note that the Ibo Nation in Nigeria are a great set of people whose Economic and socio-political activities has critically contributed to the growth and development of our dear Nation since Independence, this can not be overemphasized and the Ibo Society in Kogi State, particularly in Ganaja Community and all surrounding communities in Ajaouta LGA are not left out.

Barr. Sanni further assured the entire Ibo Community in Ganaja and all neighbouring communities that if elected to Represent the people at the National Assembly come 2023, by God’s grace, he will change the narrative by doing things differently.