News of the emergence of Senator (Dr) Ifeanyi Okowa as the vice-presidential candidate of the Peoples Democratic Party, (PDP)after a lengthy selection process, has elicited high hopes of the PDP‘s readiness to clinch the 2023 presidential election. 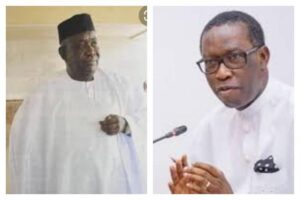 A frontline Edo State PDP stalwart, Hon Henry Duke Tenebe, is excited about the news of the pairing of the PDP presidential candidate, Alhaji Atiku Abubakar and Dr Okowa, the governor of Delta State, describing it as a “good omen” with the potential to deliver immense electoral fortunes to the party

Hon Tenebe, in his congratulatory message to Dr Okowa immediately after the news of his selection filtered into the public domain, described his selection as “well deserved in all its ramifications”,

According to him , Dr Okowa posses the ability and capacity to manage,organize and navigate the party towards reclaiming power in 2023.

Listing some of the sterling qualities of the Delta State governor which
makes him stand
out, include experience gathered over the years as , local government council chairman, state Commissioner, secretary to the state government (SSG) and of course ,a second term governor.
This he said, makes him a suitable running mate to the party’s presidential candidate

, Besides, he stated that (Okowa) possesses other qualities such as, a likeable personality, a strong winning aura, poise and, above all, a good team player.

Hon Tenebe opined that Dr Okowa is a huge political asset to both the PDP and its presidential flag bearer.

The Edo PDP Leader further stated that he is very optimistic that Okowa’s choice as the running mate to Alhaji Abubakar would translate into huge votes for the PDP in the South South zone given the calibre, integrity and the electoral value of the “chosen one”.

Hon Tenebe also commended the PDP presidential candidate, Alhaji Abubakar, for putting in place a transparent process which engendered a spirit of “no victor, no vanquished” in the selection of his running mate.