Professor (Mrs)
Oluwatoyin Babalola (nee Olorundami), will on Friday June 24, be decorated, as the second woman to be ushered into the prestigious Ekinrin-Adde’s Omo Atata Hall of Fame. 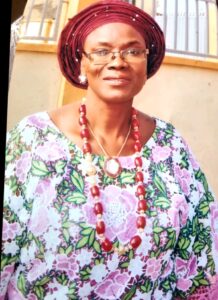 Prof (Mrs) Babalola is on record as the first female professor, not only in Ekinrin-Adde, but in Ijumu kingdom, and possibly, the first in Okun land.

Chairman, Ekinrin-Adde Community Development Association, Mr Abiodun Olorunleke confirmed that the multi talented Professor of Soil Microbiology, an emeritus professor has made the community proud by her academic laurels.

Omo Atata investiture is the the highest honour, reserved for sons and daughters of Ekinrin-Adde, who have attained great merit in their chosen career.

Prof. Babalola was born into the family of Olorundami of Aofin clan in Ekinrin-Adde, Ijumu Local government of Kogi State.

The humble and soft-talking woman has prowess to inspiring students to pursue academic and personal excellence. She strives to create a challenging and engaging learning environment in which students become life – long scholars and learners . With an exceptional track record of research success, Prof. Babalola has published many articles in both local and international journals.

She attended the Better by Far University, the University of Ilorin between 1981 and 1985 where she obtained a Bachelor of Science degree in Microbiology.

She proceeded for her Master of Science degree in Microbiology between 1987 and 1989 also from the University of Ilorin.

She bagged her Ph.D in Soil Science from the prestigious Ahmadu Bello University, Zaria in the year 1997.

Professor Oluwatoyin Babalola started her academic career as an Assistant Lecturer and rose to become a Lecturer 1 at the Ahmadu Bello University, between 1990 and 2001.

By the year 2012, she had become a Reader after working for eleven years at the Department of Soil Science and Land Management ( SSLM ) , Federal University of Agriculture , Abeokuta ( FUNAAB )

She was promoted to the rank of full Professor in 2012 at the Federal University of Agriculture, Abeokuta.

She has engaged expressly in student advisory and mentoring committees, Administration of the department , served as member of senate and member of College in the University.

She was a visiting Professor at the Crawford University, Faith City Igbesa , Ogun State . Between october 2012 – March 2014.

She was equally a vsiting Professor at the Forestry Research Institute of Nigeria, Forestry hill, Idi – Ishin, Ibadan between January 2021 and June 2022

A University Don, Professor Oluwatoyin Babalola has served in several academic and administrative capacities within the University system. Her positions include:

– Member of University Senate from 2008 till date

Many of her mentees are gainfully employed in Academic Institutions and other sectors, and are doing well in their chosen careers.
A good numbe of students who passed througb her have pursued and still pursuing higher degrees within and outside Nigeria.

Her publications are too numerous to mention. She has authored and coauthored many articles in Jounals and Books both nationally and internationally. Her records of research depth and discoveries are unmatched.

She has attended many seminars, workshops and conferences where she has served in different capacities and functions.

She reviewed the following journnals:

– Journal of Agricultural Science and Environment

– Journal of Biological Engineering and the