The 18th day of June, 2022, the flag off of two Community Development Projects in Bagido and Omowa-mopo Community would remain indelible in the minds of the people. 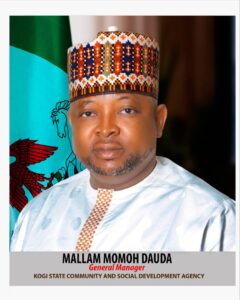 The two Community’s rolled out drums in numbers for celebration as the NG-CARES community service Project powered by Kogi State CSDA was flagged off.

At the flag off, the General Manager of the Agency, Alhaji Dauda Momoh who led the delegation of the state government said the Communities have identified two major challenge faced them, namely: Clinic & Maternity and Portable drinking water for assistance.

For the clinic & maternity Project, the agency through the General Manager presented a cheque of over #2million to the President of Bagido-isanlu Community Development Association, Chief Olubunmi with the agreement documents for immediate commencement of the said Project.

For the water Project, a cheque of #1.3 million which is 20% of the total sum of the project was also presented to the Omowa-mopo Community for immediate commencement of work.

The General manager of the agency gave ultimatum of two months completion for the two projects assuring that the needed resources is rightly available for the handlers to deliver without delay.

The General manager who praised Governor Yahaya Bello for the steady enabling environment for the community service project to thrive, said it underscores his interest in community-development, a feat that has earned him accolades generally.

Chief Samuel Babayomi who is the Baale of Omowa-mopo, in his vote of thanks, thanked Governor Yahaya Bello, also acknowledged the numerous contributions of the son of soil who doubles as the Commissioner for finance in the state.