The National Youth Service Corps (NYSC), Kogi chapter, has celebrated with His Excellency, Governor Yahaya Bello, on the occasion of his 47th Birthday Anniversary. 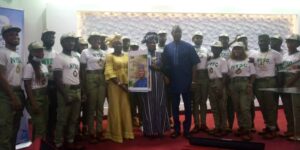 The NYSC members organised a colourful ceremony for the Governor with the display of Ebira cultural dance and presentation of Colanut, and Birthday card designed by the corps members. 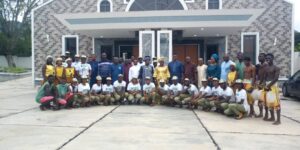 The Secretary to the State Government (SSG), Dr Afolashade Ayoade, received the corps members on behalf of the governor, who honoured him as the ‘Youth Ambassador’.

Speaking at the event in Government House Lokoja on Saturday, the State Coordinator of NYSC, Pastor Mrs Mofoluwasho Williams, described Bello as ”a young and vibrant Governor and a father of corps members in the state”.

”When somebody is doing well you have to identify with the person and celebrate with him.

”The reason for NYSC coming here is to identify with our Governor, His Excellency Alhaji Yahaya Bello, on the occasion of his birthday today.

”He is the father of the corps members in the state, and as his children, we have to identify with him on such an auspicious occasion,” she said.

”So it shows the dexterity of the corps members and that they are ready for any government assignment in the state.

”The youth are always excited about the antecedents of the Governor and have decided to honour him aa the Youth Ambassador”, she said.

In her response the SSG, Dr Afolashade Ayoade, who spoke on behalf of the governor, appreciated the corps members for the gesture, saying they were the first to give him such gift.

Ayoade expressed the governor’s delight to receive the corps members at the Government House, saying ”the governor is so elated and very happy about it”.

She described the governor as the youth Ambassador indeed, as he had ensured youth engagement, empowerment and involvement in governance.

She urged the NYSC to table all their requests for onward presentation to the governor, assuring them of urgent attention.