G37 for Amaechi Presidency has commended the former minister of Transportation, Chibuike Rotimi Amaechi for his steadfastness and commitment to All Progressive Congress, APC ideals for a better Nigeria. 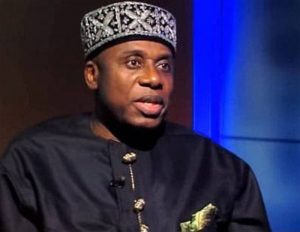 The National Coordinator of Group37, Comrade Evans City stated this in Abuja on Friday in a press statement.

The Support group eulogized the former presidential aspirant for show of sportsmanship to have congratulated the winner of All Progressive Congress, APC Presidential Primaries, Asiwaju Ahmed Bola Tinubu immediately after the election .

He said Amaechi worked entirely en -clock but it was not the right time as to God’s timing as he was it clear that he was running closely to victory but God decide other wise .

Comrade City further stated that the supporters of Amaechi under the umbrella of G-37 are very proud of him and his political sagacity as well vowed to remain committed to him and his  leadership ideologies.

He therefore charged other presidential aspirants to emulate the spirit of sportsmanship of the former minister of Transportation, Chibuike Rotimi Amaechi and  congratulate wholeheartedly the Apc Flag-bearer, Ahmed Bola Tinubu in order to move the party forward .

Comrade Evans City how ever appealed to Ahmed Bola Tinubu to be magnanimous in victory so that there will be unity and cohesion as the party is going for a greater battle with the main opposition, People’s Democratic Party, PDP in the general elections.

” The party must remain focused and United for victory as we have alot to offer Nigerians “. He stated.

G37 is a frontline political support group with over 70 thousands supporters and Coordinators in 36 States and FCT.