The Provost Kogi State College of Health Science and Technology Idah, Comrade Doctor Solomon Nuhu Anyegwu made the remarks while Congratulating Governor Yahaya Bello on his fourty seventh birthday Anniversary on behalf of Members Governing Board, management, staff’s and students of the institution today in Idah, Idah Local Government Area of the state. 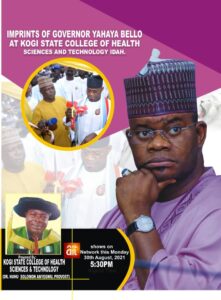 Comrade Doctor Solomon said his tremendous respect for Governor Yahaya Bello was as a result of his passionate ingenuity in providing people of the state quality leadership in governance.

According to the Provost, Fourty seventh years anniversary of the Governor is not a joke stressing that it is a beginning of More God’s exploits through him to Nigeria and the entire world and described him as a consummate team leader who’s vision is to improve all sectors of the state economy.

Doctor Solomon dedicated all his academics and Infrastructural achievement in Kogi State College of health science and technology Idah to the Kogi Star boy,vGovermor Yahaya Bello who’s the celebrant of the anniversary for his political will and support to the institution.

The Provost On behalf of stake holders of the State School Prayed God to Grant Governor Yahaya Bello more fruitful years,in good health wisdom and knowledge to move the state to greater heights.

Doctor Solomon felicitated with Governor Yahaya Bello and described him as visitor of the institution and pledge the school support to his Administration at all times.