The Kogi state Community and Social Development Agency CSDA has flag off the construction of a borehole and completion and furnishings of an examination Hall for Gboloko Community Secondary School in Bassa Local Government Area worth over fourteen Million naira only. 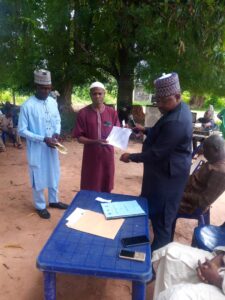 While inaugurating the projects on Friday, the General Manager of the Agency Dauda Momoh said the gesture is to ameliorate the hardships faced by the people in accessing clean and safe drinking water, and to create conducive learning environment for the students. 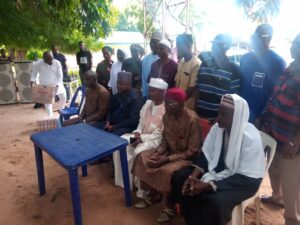 He said, the community is the first to benefit from the N-cares for the year and urged the Committee to make judicious use of the fund.
The GM. noted the community is so dear to the agency for their commitment to projects located in their place, adding that , he is confident that the projects will be completed on schedule.
According to him, the flag off is for both parties to sign commitment documents for the commencement of work on the projects.
He said, the signed documents which include, approval for the funding, Projects Development plan and financing agreement is to ensure that work are executed according to specification and schedule.
He added that with the prompt payment of their counterpart funds, he is confident of the integrity of the members of community Committee to deliver on the mandate.
While Presenting the Cheques to the community, he disclosed that the borehole will gulp six Million, Eight hundred and twenty two thousand, four hundred and Eighty naira, , ( #6822,480 while completion and furnishings of the examination Hall will receive Seven Million, nine hundred and ninety six thousand, twenty Eight naira (#7996,022.00) totalling Fourteen Million, Eight hundred and Eight thousand, five hundred and three naira(#14,808,503).
He said the first tranche of over three million naira is to complement the counterpart fund to kick-start the work

He said the projects are expected to be completed in two month.
He warned the handlers to avoid diverting the fund, saying , the signed documents have become a covenant between the community and the Agency.

He commended Governor, Alhaji Yahaya Bello for his kind-heartedness in ameliorating the sufferings of the people and his support for the agency in meeting her obligations.
In a remark, the Etsu BassaNge , HRH , Rtd Brigadier Abuh Alih, represented by the Saba of BassaNge Kingdom , Yahaya Lerama commended the Agency for choosing the community as first to benefit from N-Cares , while promising to complete the projects on schedule.