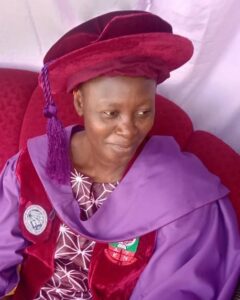 The Provost Kogi State College of Nursing and Midwifery Obangede Doctor Hannah Abraham made the remarks while speaking with our Correspondent on the fortune the accension of the Monarch brought to the people of Kogi Central.

Doctor Hannah On behalf of members Board of Governing Council, Management,Staff and Students of the collage felicitated with his Royal Majestic and Vice President of Kogi State council of Chiefs Alhaji Ado Ibrahim on his Twenty Five Years Reigns Anniversary as Paramount traditional Ruler of Ebira Kingdom in Kogi State.

According to her Illustrious sons and daughters of Ebira Land are proud of the Royal Monarch and Prayed God grant him long Life in good health,Wisdom, knowledge more Grace on the throne of his forefathers to transform the Ebira Land as an envy of the country and the world.

The Provost Kogi State College of Nursing and Midwifery Obangede Doctor Hannah Abraham further explained that during the leadership of HRM an Ebira Son Alhaji Yahaya Bello became a Governor of Kogi State, Road net work and other infrastructure improved.

Doctor Hannah Also Prayed for Ebira Kingdom to experience more progress and preserve Governor Yahaya Bello to do more for the the land and the people of the state.

She also reiterate determination to partner with relevant health bodies transform Kogi State College of Nursing and Midwifery Obangede to greater heights noting that New intake of students is coming up in August this year.