Jun 16, 2022 2022 Hajj Operation; we are rightly guided, mischievous The executive chairman of the Kogi Hajj commission has said that the commission is well guided in the selection of pilgrims for the 2022 Hajj exercise by the rules of all inclusiveness, says Executive chairman. --- says allegations of favouring one group is unfounded

— says allegations of favouring one group is unfounded, mischievous 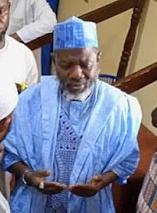 The Executive Chairman of the Kogi Hajj Commission, Sheikh Luqman Imam Abdullahi has said that the commission is well guided in the selection of pilgrims for the 2022 Hajj exercise by the rules of all inclusiveness, justice and fairness which he said the government of Alhaji Yahaya Bello stood for.

The commission chairman who was reacting to some online publications alleging that the commission is being partial in its regional allocation of seats for intending pilgrims, said the allegation is unfounded, false and a deliberate attempt by the authors to cause confusion and to mislead the public.

He maintained that the commission took time to follow all rules and regulations of the hajj selection process and ask those behind this mischief to come up with proof to back their claim.

The commission therefore advise journalists to always find out the true position of any matter before going to press, so as not to join mischief makers to present falsehood.

Meanwhile the executive chairman used the medium to thank all the intending pilgrims for their patience for their cooperation and understanding thus far.

The chairman also assured all intending pilgrims that the commission has stepped up the preparations for the 2022 Hajj exercise and would inform them at the shortest notice of the movement to Abuja.

He called on them to continue to support the commission and pray for the success of this years Hajj operation.