The Chief Executive Officer and Managing Director of AB Offshore Marine Services Ltd., Mr. Sunmola Bakare has been honoured with a prestigious award of the Reflection Newspaper Man of the Year for 2022 for his massive contributions to humanity by the management of The Reflection Newspaper. 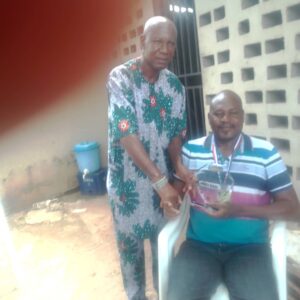 At a brief but very exciting ceremony which took place at Royal Unique Hotel, Lokoja, Kogi State, the Publisher of the Newspaper, Mr. Felix Udebu went into memory lane highlighting the efforts of Mr. Bakare to help the youths, widows, artisans as well as communities to overcome some of their challenges in the last ten years ago. He traced his hospitality to people to include payment of school fees, provision of money for community development and creation of employment opportunities to scores of Nigerians.
Mr. Udebu said the award is conferred on Mr. Bakare for his unrelenting contributions to human society.
The recipient was represented at the occasion by Mr. Anuwe Emmanuel Olubanjo who thanked the management of the newspaper for recognizing the effort of Mr. Bakare to cushion the current challenges facing the people around him.
He said this award will continue to spur him to do more for humanity.
He advised the management of the media outfit to continue to discharge its duty without fear and favour.
He is also a recipient of several other awards both locally and internationally for distinguishing himself well in his work place. Among these awards so far conferred on him are: Orange Water coming from the people and Government of the Netherlands in 2010, ODU Merit Award from the Ogori Descendants Union in 2012 his hometown; African Leader of Integrity Merit Award (Accra, Ghana 2019) and African Brand Congress Award-CEO of AB Offshore – Best in class marine service provider for 2018 among others.
Sunmola has done so much to raise the standard and profile of management and he has worked hard to put quality systems in place to make things work more effectively and efficiently. He is a powerful administrator, a great motivator and highly intelligent personality. Certainly, Mr. Bakare has set a fine example of what integrity and accountability are in management. There is only one reason to admire Mr. Bakare, he always stands on the side of strong principle, truth and honesty and nothing else.
Dignitaries across the state were in attendance to witness the event.