Teacher’s in Niger state have been
told to encourage students to key into entrepreneurship club that will stimulate them to imbibe creativity and In future be self reliance. 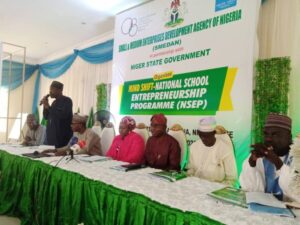 The Director General Small and Medium Enterprises Development Agency of Nigeria SMEDAN Mr Olawale Fasanya disclosed this at the opening ceremony of a three day capacity building workshop for teachers under mind shift programme of the National School Entrepreneurship Programme held in Minna.

The Director General who was represented by Deputy Director Partnership and Coordination Department Mr Levi Anyikwe at the occasion stated that, the measure is to stimulate and facilitate the culture of entrepreneurship and community service in primary and secondary schools across the country.

He mentioned that the programme is also aimed at facilitating students in exhibiting, creativity and innovation for future development of the country.

According to him the programme is a continuous one that involved step down of training to other schools that would helped to trigger a process until children imbibe the culture of entrepreneurship.

He further explained that the Agency has carefully designed Teachers manual to guide them on how to handle the students and pupils towards attainment of the design goals.

He then commended the Niger state government for it’s commitment and provision of enabling environment for the development of teachers and advancement of entrepreneurship education.

Declaring the workshop opened the Niger state Governor Alh Abubakar Sani Bello who was also represented at the occasion by Commissioner of Education Hajiya Hannatu Jibrin Salihu assured his administration rediness to support and partner with SMEDAN to inculcate entrepreneurship culture among pupils and students in State.

She added that seventy Teachers from Public schools and thirty Teachers from Private schools across the state are attending the capacity building workshop, that would in turn step down same training to both students and pupils in their various schools.