The Otun Iyalaje of Ekinrin-Adde, who doubles as the Yeye Gbobaniyi of Efon Alaaye, Chief (Mrs) Margaret Olufunke Ojo, will June 24 receive one of the most prestigious award from her home community, Ekinrin-Adde. 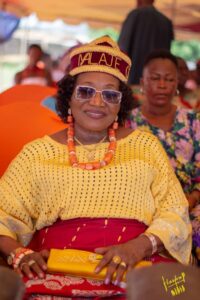 The oil merchant, according to the community’s spokesperson, Mr Victor Adekanye, will be conferred with the Distinguished Community Service Award, in recognition of her unrelenting sacrifices for development of the community.

Cbief Margaret Olufunke Ojo was born July 23, 1952 at Ilaga
to the family of Mr. Shem Adekunle Ikugbamoni Oloja of Ilaga Clan and Mrs.
Abigail Aderinola Kodeleyiri (nee Ikumapayi of Aofin Kingdom).
She attended Ekinrin-Adde Baptist Primary school from 1957-1964
and St. Paul’s Anglican Primary School 1965. She attended Federal
Government Girls College, Kano 1966-1970, where she obtained her
Secondary School Certificate. She got married in 1972 before proceeding to United Kingdom in 1973 for further studies where she graduated with HND
Marketing in 1977 and Diploma in London Institute of Marketing in 1981,
at West Bromwich College of Commerce and Technology, Wednesbury,
West Midlands, United Kingdom.

She returned to Nigeria in 1982 and participated in NYSC programme in
Lagos 1982/1983 serving with Mafoluku Grammar School, Oshodi, Lagos.
She was employed by Debis Computer Lagos in 1984 and was transferred
to Kaduna in 1986 as Marketing Manager. Her charismatic disposition
would not succumb to under utilization and enslaved destiny. She knew
God’s purpose for her life and did not waste time identifying with it.
Therefore in conjunction with her better half who is now of blessed
memory, they started an oil business named Folafunmi Nig. Ltd.
They both acquired Dalten Alheri Nig. Ltd. in 1993 to join the league of
Independent Oil Marketers.
As a determined, dynamic, energetic and visionary woman, Yemote
Petroleum was birthed in 2012 in Ekinrin Adde in order to serve the needs
of her community who have to go miles to neighboring towns to get
petroleum products.
Chief (Mrs.) Ojo (alias Yemote) is a distinguished community woman.
Her commitment to the cause of her community and citizenry is
unparalleled. She is a regular contributor to the development of her people.
Through her selfless service, she became the matron to Ekinrin – Adde
Student Union in 1989, the Otun Iyalaje 1999, Yeye Gbobaniyi, Efon Alaaye
in 2001, the Iyalaje of Ekinrin-Adde 2010. She has bagged several awards
from various groups in Ekinrin- Adde and Ijumu.
Another award today is a manifestation of a love for service to her
community in particular and humanity in general. She has children and
grandchildren and she is a devote Christian.