Engr. (Dr) Abubakar Sadiku Ohere is the commissioner of Works and Housing, Kogi state. He holds a Higher National Diploma in Metallurgical Engineering from Federal Polytechnic, Idah, Kogi State. He later obtained a Post Graduate Diploma (PG) in Mining Engineering and Masters of Engineering (M. Engr), Surface Mining Option from Federal University of Technology, Akure. In 2017, he was awarded an Honorary doctorate of Philosophy of science, by the state university of New York, USA. 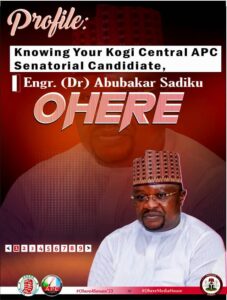 He started his career at Time Tell Nig. Limited, Lagos, where he served as Project Representative between 1993 to 1995. He also worked with the Ministry of Mines and Steel Development between 2012 to 2015. 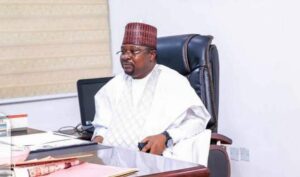 In his personal philosophy of leadership, there is abiding traits of warmth, trust and communion as the fundamental necessities of instilling a paradigm shift in governance especially at a time like this that Nigeria is facing a trying economic reality. Thus, even though he parades extensive academic competences and professional strength as a Mining Engineer, he rather dons the garb of a Social Engineer. He insists that as a leader, warmth should be key conduit of influence that facilitates stakeholders trust, confidence, communication and absorption of strategic ideas that are necessary to reboot developmental aspirations in Kogi State.

Thus, when Engineer Abubakar Sadiku Ohere was first appointed as the Special Adviser on Local Government and Chieftaincy Affairs to His Excellency, Governor Yahaya Bello, he understood overwhelmingly the enormity of challenges of re-engineering the local government administration as a critical function in driving sustainable governance that is within easy grasp of the grassroots in Kogi state. His argument has always been that without a functional and an effective local government administration, development as a state would be skewed, cosmetic, short-lived and less appreciated, his plausible performance led to his promotion to the Commissioner of Local Government and Chieftaincy in 2019.

The proactive leader was again appointed Commissioner of Works and Housing, Kogi State on January 27, 2020 by Governor Yahaya Bello. He is one of the mission conscious team player of the new direction administration of Governor Yahaya Bello. A political leader who is tenacious, committed, loyal and dedicated, and of Strong Character in discharge of his role as the commissioner for works and housing, impact both the state and the populace.

As a Governor Yahaya Bellos kitchen cabinet who has indeed demonstrated deep loyalty and integrity to the New Direction revolution in the administrative garb of the current dispensation; Abubakar Ohere understands that a truly transformational change that we all desire in the state demands a true change via a sacrifice of things that may seem dear to us as a people. He believes that change is a sacrifice; a sacrifice that is sometimes intractable and makes true leadership difficult because it involves deep-seated conflicts, value-laden issues and of course, our concept of loyalty.

Engr. (Dr) Abubakar Sadiku Ohere was born in July, 1966 in Okene, Kogi State. Commenced his sojourn into western education in 1975 at the popular St. Andrews School, Okene. In 1979, he proceeded to the Lennon Memorial College Ageva where he distinguished himself.

In his quest to satisfy his unquenchable thirst for knowledge, he sought and obtained admission into Kwara State Polytechnic, Ilorin to study Engineering course from 1987 to 1989 where he bagged certificate of National Diploma in Metallurgical Engineering. At the end of his course in Kwara State, Engineer Ohere turned down several offers of job for further training at the Federal Polytechnic, ldah from 1990 to1992.

In order to have a taste of national and international training in Mining Engineering after twelve months of compulsory service to the nation, the Ghana University of Mines and Technology in 2009 did not hesitate in admitting him to undergo Proficiency training in Explosives and Blasting Technology. Engineer Ohere secured pensionable appointment with the Ministry of Solid Minerals Development in 1993.

Engr. (Dr) Abubakar Sadiku Ohere is well read and has attended several professional courses both across Africa, USA, Australia, China and Poland. He has presented many scholarly and well-researched papers in different fora.

He is happily married and blessed with children. He loves reading, traveling and mentoring.