Gov. Yahaya Bello of Kogi and the Director-General of his Presidential Campaign Organisation, Hafsat Abiola-Costello, on Saturday led various groups of Nigerian women to commemorate the June 12 Democracy Day in Abuja. 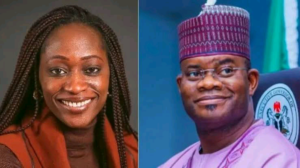 The News Agency of Nigeria reports that the event was held in honour of the late Chief Moshood Kashimawo Olawale (MKO) Abiola, the presumed winner of the June 12, 1993 presidential election. 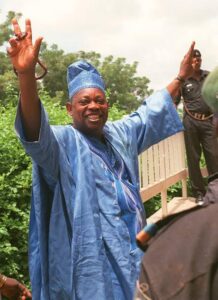 Bello, a presidential aspirant in the just-concluded primary of the All Progressives Congress (APC) said the event was held to keep the hope and vision of Abiola alive

Bello said that he was excited that almost 30 years after the demise of Abiola, his vision continued to be relevant, adding that this was one of the reasons he was determined to contest the position of president.

“Today, we are commemorating and remembering June 12, championed by our father, our hero, our legend, our icon, Chief MKO Abiola and Hajiya Kudirat Abiola.

“I appreciate God almighty and all those who stood firm, saw a vision, sacrificed and are still sacrificing for the cause of democracy in Nigeria.

“I appreciate our President, Muhammadu Buhari, and his team who deemed it necessary that after 29 years, our father, Chief MKO Abiola, deserved to be well honoured and decorated posthumously with the highest honour of the land, Grand Commander of the Federal Republic (GCFR).

Bello said the late Abiola represented hope for this country and for the current and future generations.

“I was in the secondary school in 1993 when the struggle began and almost 30 years after, we are here to bear the torchlight of that struggle and hence my decision to contest the presidency so that this hope can be rekindled,” Bello said.

He, however, noted that the emergence of the National Leader of the APC, Asiwaju Bola Tinubu as flag bearer of the party would further bring the vision of MKO Abiola to fruition.

The governor said that Tinubu was one of those who championed the June 12 struggle, noting that he would not fail to rekindle those hopes and visions.

He urged women to give all their support and prayers to Tinubu so that he could emerge as the president in the 2023 elections.

“I am happy and comforted that the winner of that APC Special Convention, our leader, Bola Ahmed Tinubu, won the election, fair and square.

“He (Tinubu) was right behind Chief MKO Abiola in that struggle and so you can see that our hope is still alive.

Abiola-Costello assured Nigerians and women in particular that with Tinubu, the dreams of MKO Abiola would be actualised.

“Twenty-nine years after June 12, 1993, it is still a message of hope. Yesterday, we had the pleasure of being in the important meeting where Gov. Bello received Asiwaju Tinubu at our campaign secretariat.

She commended Bello for his policies and style of governance, especially the inclusion of women in his administration.