Hon. Sunday Karimi Mourns Passing Away of Mayaki of Kupa.

…. Condoles Government and the people of Kupa Kingdom. 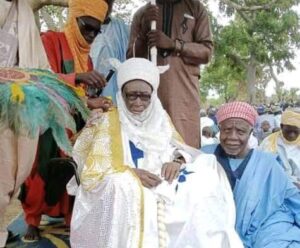 The Kogi West APC Senatorial District Flagbearer, Hon. Sunday Karimi, has condoled with the government and people of Kogi State over the passing of the Mayaki Of Kupa, Alhaji Muhammadu Kabir Isah, whose reign covered major historic transitions in the country, and witnessed transformations in his domain.

In a condolence message issued as a statement for which he personally signed and made available to newsmen in Lokoja, on Sunday, Hon. Karimi said, “the Mayaki of Kupa’s 43 years rule (1979 – 2022) was remarkable in many ways, most significant was the emphasis he placed on human development, thereby encouraging learning as a culture and formal education as a necessity while promoting values of peace and stability.”

As a highly revered traditional ruler, the Minister commended the late monarch’s numerous participations in national meetings and conferences to shape the future of the country, and the living words of wisdom he shared at every opportunity on unity and people-focused governance.

The two time former House of Representatives Member, prayed that the Almighty God would receive his soul.