Iya Ewe of Ijumu Land, who doubles as Yeye Aare Gbeluniyi of Ekinrin-Adde , Chief (Mrs) Comfort Olayinka Abiodun Tanimola has been announced by the Leadership of Ekinrin-Adde Community Development Association (EACDA) on the approval of Olu- Adde of Ekinrin-Adde, Olu Anthony Bamigbaiye Idowu, ACA, (Ahe Maworo 1) as one of the lucky recipients of Life-Time Achievement Award at this year’s Ekinrin-Adde Day Celebrations. 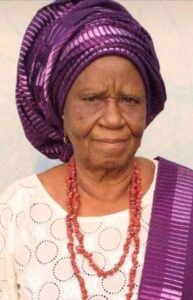 The Award, according to a detailed letter sent to her, through the Secretary General of the community, Elder, Deinde Toyin Komolafe, is one of the greatest honour reserved for senior citizens of our Community that had led exemplary lives in service to the Community.

Chief (Mrs) Tanimola is one of maiden recipients of the great award.

Both parents were devoted parents who loved and gave her the best they could afford.

Matron as popularly known was born on the day the Aigba Imole came out for their celebration which they called ‘Olaja’, hence the name Adehoro now known as Abiodun.

Mama Matron worked as a Primary School Teacher in Odokoro and Erusu in Ekiti State formerly in Western Region. She later learnt fashion design (Tailoring) in Ilorin and Kaduna after which she joined The Kingsway Stores, a Department of UAC in Kano.
She worked in both Kano and Kaduna before returning to Kwara State to join Midland Stores as a cashier.
She returned home to help in the development of Ekinrin-Adde after many years of sojourn around the Northern part of Nigeria.
Tanimola was employed by the then Kwara State Ministry of Education as a Matron at the female hostel of Baptist High School in Ekinrin-Adde.

Mama served in various capacities in the home branch Exco of the Ekinrin-Adde Community Development Association (EACDA) for Decades.

She was given an award in recognition of her long and meritorious service to the Community.

Matron Tanimola is a fervent believer and she served in various capacities as sunday school Teacher, Choir Mistress, and many other positions, too many to list.
She was one time leader of the 1st Baptist Church, Ekinrin-Adde Young voices (chorister) and a life member of the Bible Society of Nigeria.

She had the privilege of going on Pilgrimage to Israel in 2017.

In recognition of her contributions to the development of Ijumu and Ekinrin-Adde, she was honoured with the Chieftaincy title of Iya Ewe of Ijumu Land in 1983 by the Olujumu of Ijumu Land, OBA David Olorunmaiye (Esein Magba 1). She was also honoured with the title of Yeye Aare Gbeluniyi of Ekinrin-Adde in 2012.
She joined Politics in 2002 and served two terms as woman Leader of PDP, Ekinrin-Adde ward before resigning from active politics.
She is still actively engaged in Community service and will clock 83years on the 9th of December 2022.