Group Appeals To Oba Of Benin To Abolish Ekiokpagha Treaty

A group, Coalition of Benin Socioal- Cultural Groups, has appealed to the Oba of Benin, Oba Ewuare II, Ogidigan to abolish a treaty known as Ekiokpagha, which according to the group a family known as Ogiamien is using to deceive members of the public and parading themselves as royal family. 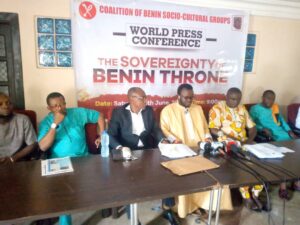 The Coalition, going down memory lane during a prese conference held in Benin on Saturday and titled ‘Sovereignity of the Benin Throne,’ said Ogiamien chieftaincy title came into existence in 1968, after one Mr. Edo wrote a letter to the then Oba of Benin, Oba Akenzua II, appealing to the Oba to be recognised as Ogiamien, which according to the group was acknowledged.

The press conference which was presided over by Imasuen Izoduwa on behalf of other members of the coalition said: “Ogiamien is a chieftaincy title as only recognised by the Benin Traditional Council.”

He added: “We have a letter that was addressed to Oba Akenzua II by Chief Edo who was the then Chief Ogiamien of Benin kingdom on the 9th of August 1939 begging to be recognised as a chief , like several chiefs in Benin kingdom.

Further going memory lane, he added, “To further buttress the point that Ogiamien was never as much an important figure or stumbling block in Benin history, Oba Ewedo created the first known title outside the “Edion” called Niyasowa now abridged as Iyase, and that title was referring to the supremacy tussle between the Oba of Benin and the Edion of the kingdom of which Oliha is the head.

“So, from here, you can see that Ogiamien was never in any tussle with the Oba of Benin other than the treaty of the right to hereditary succession and not ownership of land.”

While declaring the Benin Throne as unsurmountable and sovereign, the group said the “Oba of Benin remains strong and a unifying bond for the Benins and all.”

“The Oba is the author and the preserver of the invaluable precepts and practices in the administration of his kingdom and people.”

Also speaking, Comrade Osaze Odigin, a former Public Relations Officer, Edo Civil Society Organisation (EDOCSO) said members of the coalition were determined to protect the sanity and identity of the Benin throne, adding that the briefing was just

Edigin, on behalf of other members of group vowed to resist any attempt by any institutions or individuals to distort the Benin history, just as he pledged his allegiance to Oba of Benin.