2023: El-Rufai Gives Reasons Why A Muslim-Muslim Presidential Ticket Shouldn’t Be A Problem

Jun 11, 2022 2023: El-Rufai Gives Reasons Why A Muslim-Muslim Presidential Ticket Shouldn't Be A Problem

The Governor of Kaduna State and member of the All Progressive Congress (APC), El-Rufai has reacted to the trending topic of Muslim-Muslim presidential ticket which most people kicked against. We should all recall that the Christian Association of Nigeria (CAN), and the Former Secretary to the Government of the Federation, Babachir Lawal kicked against Muslim-Muslim ticket, stating that Nigerians will not accept it. 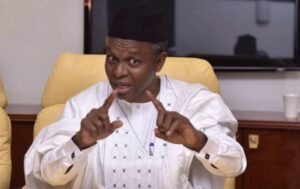 El-Rufai stated his reasons why a Muslim-Muslim ticket shouldn’t be a problem on Channels Television’s special edition of Politics Today via zoom and according to him, his deputy Governor, Hadiza Sabuwa Balarabe is a Muslim and when he picked her, he was told he would lose the election. He said the election was a landslide victory and that because his deputy is a Muslim didn’t stop her from being a powerful woman.

El-Rufai said that the business of governance has nothing to do with religion and that selection should be based on ability and readiness to cause a positive change and not religion.

He said what we should be after is development and not religion, adding that the developmental strides of a person in power is never a function of the person’s religion. He said we are faced with insecurity, economic meltdown, global issues and that what some people are concerned with is the religion of who would be president or vice.

“It is not our religion that will solve our problem, it is the people who are competent and capable that will address the problem of Nigeria, unite the country and put it on a progressive part”, he said.