A Chieftain of the Lokoja Local Government chapter of the All Progressives Congress (APC), Ibrahim Sulaiman, has mocked the defeat of Governor Yahaya Bello in the just-concluded presidential primaries of the Party. 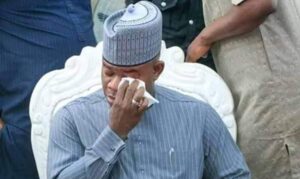 According to Sulaiman, the end to the presidential quest of the governor was a prayer answered for the downtrodden in the state.

Sulaiman, who accused Bello of expending public resources to fund unpromising personal agenda, said his defeat was a “timely good riddance to the financial banditry, resource haemorrhage and complete absence of governance in Kogi State.”

Governor Bello, who polled a total of 47 votes in the Wednesday primaries, came fifth as the winner Asiwaju Bola Ahmed Tinibu with 1,271 votes.

Reacting to the development, the APC chieftain said the governor had failed to propel needed developments in the state, stressing that his quest was to the detriment of the citizenry.

Sulaiman noted: “Despite persistent calls by groups and the opposition on the governor not to shirk his responsibilities as the Chief Executive Officer of the State, the governor ignored everyone and abandoned governance in the State.

“The height of this was his relocation to Abuja since two years ago and the killing of APC in Kogi through imposition of unpopular candidates during the just concluded party primaries all over the state.

“Sometimes one is perplexed and wonder how the governor sleeps without his conscience troubling or pricking him that he has abandoned those that he found himself in government to care for as their governor.

“There is no doubt that the task of rebuilding Kogi State and her image will be a daunting one by Gov. Bello’s successor after the bashing the governor has subjected the State, her treasury and image to in 7 years of misgovernance.

“Now that the governor’s daydream and Presidential cookie has crumbled in his face, let the governor immediately reconstitute the State Executive Council and allow governance to continue in the State even at the abysmal level we have lived with in the last seven years.”