Alh.Yahaya Adoza Bello, a 46 years old youngest sitting democratically elected executive governor of Kogi State in North Central of Nigeria may have been viewed differently by Nigerians and non Nigerians. 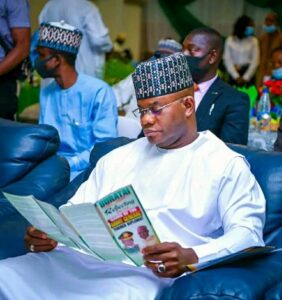 He became an elected executive governor of a laden ethnic suspicious and obscured kogi state which was created in 1991and has been ruled by successive leaders from kogi East zone (The Igalla ethnic tribe) for 21 years. For purpose of refreshments:- Col.Danladi Zakari-2yrs, late prince Abubakar Audu-6yrs, Alh. Ibrahim Idris- 9yrs and capt.wada Idris-4yrs. It’s worthy to buttress the points that during the administration of gov. Ibrahim Idris- under People’s Democratic Party(PDP), Mr. John Odawu was the PDP state chairman and Dr.Ahmadu Ali was the PDP National Chairman respectively from kogi East zone.
The divine unifying emergence of governor Yahaya Adoza Bello from kogi Central zone brought some very essential human intangible and tangible development and progress such as:-
* Restoration of peaceful co-existence among the ethnic groups in the state
* Even distribution of appointment/ Employment, government patronage, structural economic and social facilities across the three senatorial zones of the state.
* Traditional rulers upkeep and harmony
*Youths and women engagement/ empowerment
* Security of life and properties within the state and environs.
* A front liner defender of the citizens of kogi state and Nigeria at large against anti-policy or repugnant programs such as the world wide Covid-19 anti-citizens and economic stigma.
The erudite, educated, energetic, dynamic and intellectually focused oriented youngest executive gov. Yahaya Adoza Bello saw the needs to respond to the clarion cries of the teaming youths and women of Nigeria and decided to sacrifice to swim the Nigerian’s muddy political water and offered himself to represent the vulnerable and voiceless teaming youths and women and vied for the 2023 presidency of the Republic of Nigeria in order to succeed President Muhammadu Buhari.
He was the first Nigerian to start the move and remain focused until other aspirants under the ruling party, All Progressive Congress (APC) joined the presidential race and went through the process of the party presidential candidate selection/election thus:-
✓GYB started and remain focused through out the process.
✓GYB stood and made his voice heard when the process was in anyway skewed.
✓GYB was the youngest among the so-called political timber and caliber but undeterred.
✓GYB represented the voice of the oppressed minorities in the Nigeria politics.
✓GYB represented the voice of the youths and women of Nigeria
✓ GYB was among the 13 successful screened 2023 presidential aspirants out of 23
✓GYB never negotiated his presidential aspiration for personal inducement/ monetary gains as it was the order of the game.
✓GYB participated overwhelmingly in the presidential aspirants manifestos briefings before the delegates and party leaders.
✓GYB Participated in the presidential primary election vote and proudly came fifth (5th) among the eventual eleven (11) contestants.
✓GYB represented Federal Republic of Nigeria.
✓GYB in the history of presidential race represented kogi state.
✓GYB represented North Central of Nigeria
✓GYB represented equity and Fairness in the Nigeria politics
✓GYB represented minority ethnic groups including Egbira ethnic groups of Nigeria
✓GYB represented hopes and future generations.
✓GYB is the first to go this far among his contemporary peer group in the history of Nigeria politics.
✓GYB is a Hero and a referencing personality in Nigeria.
✓H.E, Governor Yahaya Adoza Bello is a Rising 🌞 Sun.!!!
*Long Live Nigeria
*Long Live North Central
*Long Live kogi state
Long Live Egbira Nation
*Long Live Gov. Yahaya Adoza Bello.
*Long Live well-wishers 🙏🙏🙏