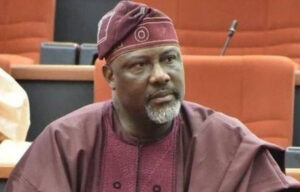 The Petition was written by Sen. Dino Melaye and addressed to the National Chairman of the PDP.

The NWC said the allegations are baseless and lack merit.

The petition as written by Sen. Melaye was centred on manifest irregularities is against the conduct of the Kogi West Senatorial District at the just concluded primary election held on Monday 23 May, 2022, in which I participated as an aspirant, and for which Tijani Yusuf was returned as elected.

According to Sen. Melaye’s petition:

” The ground for my petition is the deliberate denial of Accredited National Delegate Prince Olusola Akanmode from voting and replacing same with a non-accredited delegate during the Kogi West Senatorial District Pnmary Election.

” Prince Olusola Akanmode was elected as the Consensus Candidate/ National Delegate whose name was forwarded to the People Democratic Party by the Ijumu Local Government Chairman and Secretary, which was accepted by the PDP and since acted upon.

” A copy of the Letter forwarding the name of Prince Olusola Akanmode is hereby attached and marked as ANNEXURE “A”,

” The Constitution and Guidelines of our great party does not allow for the substitution of delegate at the venue of the primary election Contrary to the Constitution and Guidelines of our great party, the National Delegate (PRINCE OLUSOLA AKANMODE) whose name appeared on the Delegate list who voted during the House of Representatives Primary Election which was held in the morning on the same day was substituted with the name of Ojo Abiodun Samuel during the Kogi West Senatorial District Primary Election, held on the same day with the House of Assembly and House of Representatives. A copy of the Delegate List is hereby attached and marked as ANNEXURE “B”.

” It is imperative to state that PRINCE OLUSOLA AKANMODE voted in the House of Assembly in the morning and the House of Representatives in the afternoon. However, his name was surreptitiously removed from the Delegate List in the evening when the Senatorial Primaries was about to commence on the lame reason of “order from above “ and thereafter, substituted with the name of

” Recall that in the said election, my humble self and Tijani Yusuf
scored 88 votes each while Hon. Samuel Aro scored 71 votes.

” Premised on this, there was a re-run wherein I was said to have gotten 99 Votes while Tijani Yusuf allegedly obtained 163 votes.

” Sir, I make haste to say with respect, that, you cannot change the rule of the game when the game is already half-way.

” Furthermore names of nine (9) ad-ho delegates from Ijumu Local Government were also changed and I reported same to the National Organizing Secretary with evidence and nothing was done about it despite promises at various time from the National Organizing Secretary that something will be done. I have evidence of my whatsapp communication with him on this.

” I do hope that this petition will be given due attention as my resort to legal redress remains my last option. The Zamfara case is still fresh in our memory as refusal to look into my petition will leave PDP with no candidate in the forth-coming general election“.

The National Working Committee threw away the petition for lack of merits with Hon. T.J. Yusuf as the candidate for Kogi West Senatorial District for the 2023 election.