An entrepreneur, Kehinde Teluwo, has emerged as the New Nigeria People’s Party, (NNPP) senatorial candidate for Ogun Central for the 2023 general elections. 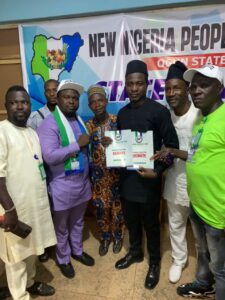 Teluwo’s emergence was through a consensus arrangement of the party.

Teluwo who addressed journalists on his emergence shortly afterwards said he would justify the confidence that the party leadership had reposed in him by picking him.

Teluwo made it clear that he would do all in his power to ensure the quality representation of his people at the upper legislative chamber.

He added that the past and the present representatives of the senatorial district did not know the functions of a senator, emphasising that no bill had ever been sponsored by them in favour of the people they represented at the Senate.

He said, “I have come to change the old narratives and my people should be expecting the dividend of democracy in full if I am allowed to represent them in the House of Senate in 2023.”

“Enough is enough for the political injustice from the old cabals that had been in charge of Ogun Central Senatorial District. It is time for the youth to take over and the time is now,” he said.

2023: Ajadi congratulates Ajirotutu, Teluwo over their emergence as Senatorial Candidates

Meanwhile, a political stalwart of the NNPP, in the Southwest, Olufemi Ajadi, has congratulated Hon. Wasiu Oluwafemi Ajirotutu of Ogun East and Kehinde Teluwo, Ogun Central over their emergence as Senatorial candidates for the NNPP.

Ajadi made the congratulation at his office in Ogun State while speaking with journalists.

He described the emergence of the two as a further warning to the old brigades to vacate the scene or be embarrassed.

Ajadi said the Nigeria of today required persons with youth and vibrancy in its critical sectors so that the country could move forward.

He added that the victory of Ajirotutu and Teluwo is a well-deserved and long-overdue one, adding that both candidates had been active in humanitarian acts in their respective constituencies.

Ajadi said, “Accept my congratulations on your victory and my best wishes for your success as you prepare to take up the responsibilities and challenges of your senatorial districts.”

“I look forward to working with you so that together we can lift our people.

Ajadi expressed the optimism that together the youthful politicians will stir fresh hope in Ogun people by providing them dividends of democracy.

” I see our constituencies taking the lead in socio-economic and political developments of our country.

“Once again, accept my congratulations. “