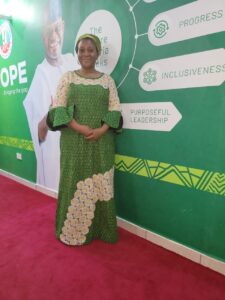 In a statement made available to the press in Lokoja, Hajiya Rekiya reminded the delegates of the dire need to address rising spate of insecurity in the country. She noted that at this critical time of choosing the potential successor of President Muhammadu Buhari, indisputable traits like personal capacity, agility and proven track records in tackling insecurity are major factors to consider as they cast their ballots.

The KEDA boss said it was only Yahaya Bello that posseses the outlined qualities just as he has demonstrated through his purposeful leadership as Governor of Kogi State. She further reiterated that as the governor with the highest record of women and youth involvement in governance, he would not only achive resounding victory at the general elections. She further noted that Nigeria would also witness a political rebirth if Yahaya Bello is given the chance to fly the APC Presidential ticket.

She, however, beckoned on the delegates to cast their votes in favour of Yahaya Bello to avoid wasting the opportunity to set the nation on the path true unity, progress and national prosperity.