Former governor of Akwa Ibom State, Senator Godswill Akpabio has been described as ‘’a man of extraordinary courage, wisdom and generosity’’ 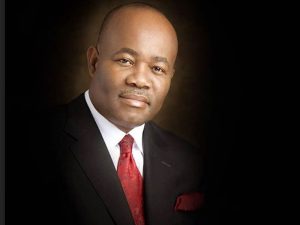 ‘’Senator Godswill Akpabio is the people’s rallying point and source of inspiration. We are confident that he’ll win the All Progressives Congress (APC) presidential primaries ’’ a release by Southern and Northern APC leaders Friday night said.

‘’The chances of Senator Akpabio getting the presidential nomination are high. A lot of delegates are working hard for the emergence of Akpabio as the party’s presidential candidate’’

The statement by the Chairman of North-South Presidential Movement (NSPM), Alhaji Umaru Sarki announced the official position of the Southern and Northern APC stakeholders on Akpabio and the ruling party’s presidential primaries.

‘’Senator Godswill Akpabio is set for a resounding victory’’

They praised the former Senate Minority leader for transforming Akwa Ibom to a model State.

‘’Under him, Akwa Ibom evolved into one of the most progressive States of Nigeria’’.

The leaders applauded Akpabio for devoting his indomitable energy, brilliant mind and ardent spirit towards the transformation of the country.

‘’Senator Godswill Akpabio is completely detribalised. He loves Nigeria more than any other thing’’

The leaders also commended Akpabio for making an appreciable difference in the Niger Delta.

The statement emphasised Akpabio’s impressive credentials, personal qualities and character, administrative skills, numerous achievements and consistency in standing up always on the side of the people

‘’Senator Godswill Akpabio has gained ground in the six geo-political zones. We are going to make him APC presidential candidate’’ the statement added.