… Says I know of a man who represents the HOPE and aspiration of Nigerians across all divides.

This night will be giving way to a day slated for a decision that will earn a place in our history as a nation. 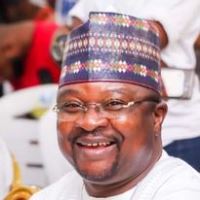 Your esteemed self will be undertaking the herculean task of midwifing the birth of the Flagbearer of the Presidential Candidate of our Party, APC.

Being laid on your bare hands is the power to determine the fate of our dear country, Nigeria for the next four years.

We must beam our searchlight to a character, Nigerians desire and deserve to lead them to the promise land at this material time.

I know of a man at the centre of Nigeria whose domain borders about 10 states, yet lowest in boundary related crimes.

I know of a man who governs a mini Nigeria, characterized with multiple ethnicity and all tribes live in peace, love and harmony owing to his leadership qualities.

I know of a man whose tolerance and approach to religious issues has made his domain the least when it comes to record of religious crisis across the nation.

I know of a man who has earned himself the Award of the Most Security Conscious Governor in Nigeria credited to his unmatched repute of securing lives and properties of his citizens.

I know of a man whose cabinet is adorned with vibrant youths and other capable Nigerians from other states (One Nigeria).

I know the only man in the country who has been decorated as the “Hero of Women Inclusion”, having surpassed the 35% affirmative action for women inclusiveness in governance.

I know of a man who rose to broker peace between the Amalgamated Union of cattle Traders and other aggrieved parties which averted the dreaded Zonal war and hunger during the food blockade that threatened our peaceful coexistence as a nation.

I know of a man whose decision to put the comfort of his citizens first during the outbreak of the novel COVID’19, was later ajudged the best for humanity.

I know of a man whose decision to proscribe ASUU has put his state ahead of others academically as parents across the nation now look forward having their children’s school in his state.

I know of a man whose penchant for infrastructural development has turned his state into a hub of construction.

That man today is eager; prepared; courageous; capable and determined to replicate the aforementioned at the National Level for a better Nigeria. That man represents the HOPE and aspiration of Nigerians across all divides.

As you move from across the 36 states of the federation in to the FCT on this nation-saving assignment, I beseech and urge you to through the instrumentality of your mandate, deliver to Nigerians, the man of their dream. His name is *YAHAYA BELLO,* the Executive Governor of Kogi State.