A man identified as “Mallam Yahaya Musa” from Abocho in Dekina L.G.A. of Kogi State was recently nabbed by the Police following a petition by one Seidu an indigene of the Community over his act of impersonation as a “Beaded Senior Gago of Abocho” for more than 17 years. 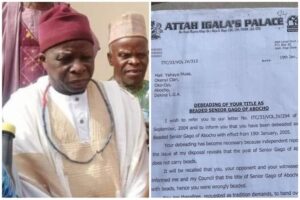 A copy of the petition written to the Office of Kogi State Commissioner of Police and sighted by our correspondent has it that the suspect had in 2004 deceived the then Attah Igala, HRM Alih Obaje and the Attah-in-Council into beading him as Beaded Senior Gago of Abocho on 1st September, 2004, but upon discovering the deceit, the Attah Igala debeaded the suspect on 19th January, 2005, and further directed him to hand over the beads to the Traditional Liaison Officer – a directive which the suspect deliberately failed to comply with for 17 years. It was gathered that despite been debeaded, the suspect continued to wear beads around and dressed in chieftaincy attires with red caps to match. The suspect was also said to have been using the salutation “Ayidu” which is a royal salutation meant for the occupant of the Stool of Onu Abocho (First Class Status). It was further gathered that the suspect has been using the fake beads he was wearing to run parallel government as a “traditional ruler” in Abocho and to foment troubles in the area; a challenge which the immediate past Onu Abocho faced until he joined his ancestors. Information also has it that the suspect’s children have always uploaded the suspect’s pictures on social media wherein the suspect appears in chieftaincy adornments and royal beads while tagging him as the “authentic Ayidu” just to spite the occupant of Onu Abocho Stool and to create communal crisis in his domain.

Fed up with the various acts of impersonation being exhibited by the suspect and the likelihood of breakdown of law and order in that regard, the petitioner via his petition brought the various acts of impersonation of the suspect to the notice of the Police and the suspect was subsequently invited for interrogation. In his statement to the Police which was written by his lawyer personally, the suspect denied being aware of his debeading which took place in 2005. The suspect was later taken to the Palace of Attah Igala in Idah and the beads were removed by Gabaidu on 6th May, 2022. Further investigation has shown that the suspect was/is very much aware of his debeading that took place in 2005 as the suspect even went to the High Court of Dekina in Suit No. DHC/1CV/2005, to unsuccessfully challenge his debeading through his Counsel, E.A. Haruna, Esq.; the same lawyer who personally wrote the statement of the suspect in the Police wherein he denied knowledge of the said debeading!

With the removal of the beads by Attah Igala, peace and sanity have now been restored in Abocho. The indigenes and residents in the area have been jubilating and expressing immense gratitude to the Attah Igala and the Police on the manner in which they ended the evil impersonation that has been at play in Abocho for the past 17 years.