2023: We Will Negotiate Owan, Akoko-Edo Political Relevance With Votes: — Stakeholders 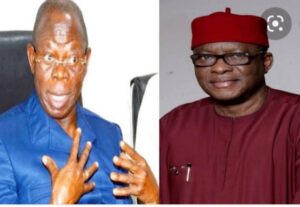 The Stakeholders who rose from a meeting in Auchi, Etsako West Local Government Area of Edo State on Sunday, said that the move became inevitable because of their seeming marginalisation from the politics of Edo North senatorial district.

They noted since the advent democratic dispensation in 1999, Owan and Akoko-Edo have only had the senate seat for eight years while the Etsakos have had it for 16 years.

The stakeholders stressed that what is more worrisome is that the same Etsako is about having it again in 2023 since the two dominant political parties, All Progressives Congress (APC) and Peoples Democratic Party (PDP), have picked their candidates from the area.

They pointed out that in the spirit of fairness and equity, Owan or Akoko-Edo should have been considered for the Edo North senatorial seat in the coming elections.

Mr Ayo Olowojoba, a representative from Akoko-Edo, said, “We cannot talk of political representation of AFEMAI people without conscientious consideration of Owan, Akoko-Edo and Etsako natural bond. how can we promote genuine brotherhood when equity is suppressed?

On his part, Mr Omeiza Ogumah also from Akoko-Edo, insisted on the need to put an end to the political marginalisation of the areas concerned.

According to him, “As political leaders, we have responsibility and capacity to resist the unpalatable insinuations that Owan and Akoko-Edo are inconsequential in Edo-North politics.

“The Power of 2023 is in our hands. Owan and Akoko-Edo will decide 2023 Senate, and we will only give our votes to the man we can trustand who will protect our interest.”

Similarly, Mr Sunny Ifijen from Owan said that it was now obvious that they have been told to take take destiny in their hands.

“It is narrow-mindedness to sing victory song when a game is merely at first half; that somebody has secured a party ticket does not imply that he has secured the peoples trust.

“Where is the hope of Owan and Akoko-Edo people at this junction? Obviously, we have been told to do it our own way and that we shall do,” he stated.

It would be recalled that Victor Oyofo from Etsako axis held the senate seat from 1999 to 2007 while Yisa Braimoh from Owan had his from 2007 to 2011.

Domingo Obende from Akoko-Edo represented the senatorial district from 2011 to 2015 after which Francis Loretta Alimikhena and the incubent from Etsako had occupied the seat from 2015 to date.

Alimikhena who just defected from the APC over the party‘s ticket for his third term, has won the PDP ticket to seek reelection.

Meanwhile, the former governor of the State, Mr Adams Oshiomhole also from Etsako, won the APC ticket for the district.