The support base of the Vice–President, Prof. Yemi Osinbajo continues to swell ahead of Monday’s presidential primary of the ruling All Progressives Congress (APC) as more governors have switched to his side. 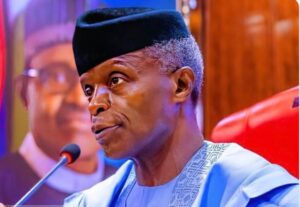 Thenigerianpost had exclusively reported during the week that President Muhammadu Buhari is backing Osinbajo as his candidate and wants him as his successor so he can continue and improve on the gains of the administration.

There was a stalemate among the governors earlier in the week on the likely consensus candidate but as of Friday evening, a credible presidency source said the majority of the governors have pledged allegiance to the Vice–President.

“Most of the governors have aligned with the Vice–President as the consensus candidate. Those who are not with him are governors of Kebbi, Jigawa, Plateau, Kano, Lagos and Osun. But we are waiting for the president’s meeting with them tonight when he is back from Ghana”.

” Based on latest developments, the contest will be a straight fight between Vice–President Yemi Osinbajo and Governor Abubakar Badaru of Jigawa State”.

However when contacted, one of the loyalists of Asiwaju Bola Tinubu said he is optimistic that the former Lagos state governor will clinch the ticket.

” The President himself will be shocked on Monday. The governors will listen to him as a mark of respect but do what they wanted. Let them conduct the primary a million times, Asiwaju Tinubu will emerge victorious” he said.