“Mummy, why are you complaining of how to remove the growth, in your head, just buy razor blade and I and junior will remove it, so that you can be free from the pains. 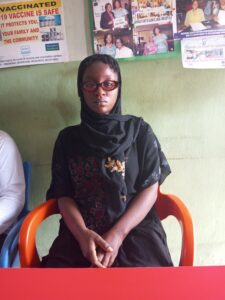 This is the vintage toddlers, Alpha,7 and Nasaya 4, when they visited NUJ, soliciting for help for surgery. 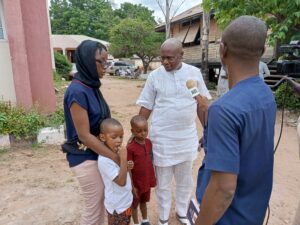 This is a hilarious profering solution by little siblings, when their mother, Mrs Faith Attah, appealed to the Kogi state Governor, Alhaji Yahaya Adoza Bello, corporate Organisations and well meaning NIgerians to assist her in raising the sum of Eighteen Million naira(#18M) to enable her undergo brain Tumor surgery in India. 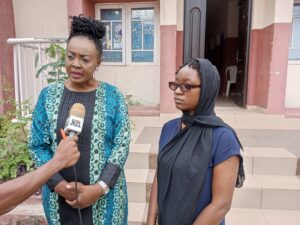 Mrs Attah, 30, in company of her Husband and two male children made the appeal at the NUJ press Center on Friday in Lokoja. 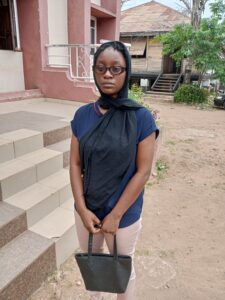 She said, her family has spent all their lives savings to ensure she lives as a result of life threatening ailment. 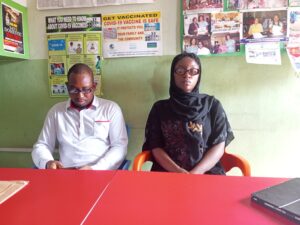 She said, her problem started four years ago , when she developed severe migraine, which led her to guest of both private and public hospitals with different diagnosis.

Mrs Attah, a graduate of Maths and statistics from Kogi State Polytechnic stated that she has been a full house wife, since, she could not get any gainful employment, which had compounded her situation.

She said, her condition got worse by every passing days, as her tooth was removed suspected to be the cause of the migraine.

She added that sometime last year, her right eye was crossed and an opthalmologist recommended an eye glass for her, yet, the situation persisted.

According to her, her case continued to the point that her body became numb, even as a neurologist directed for MRI scan.

Explaining further, she said, the result of the scan revealed a growing tumor in her brain weighing 3cm in size, stressing that she was referred to India , according to neurologist, has the capability to handle her situation.

She said, the tumor is wrapped around so many nerves in her brain, that needs complicated operation, which most hospitals in the country lack the equipment to handle it.

She added that the neurologist advice her to go to India which boasts of modern equipment, such as Gama Knife and Cyber Knife needed to perform the surgery.

According to her “we contacted an Indian hospital, which gave approximate cost of #18M to cover the the surgery and other expenses.

Speaking to reporters, the husband, Mr Ibrahim Attah, a staff of Kogi State Polytechnic, amidst sobbing, said , he has exhausted his life saving, visiting hospitals to save her life without success, as his meager salary could no longer sustain the upkeep of the family.

Attah, disclosed that, he got married to his wife, when , she was 22 years , while a student of the polytechnic, and the union has produced two male children, Alph 7 and Nasaya 4 are at the point of being dropped from school for inability to pay their school fees.

He appealed to Nigerians to help save her life, saying , with his paltry salary, he would not be able to raise the amount, he lamented that all avenues for borrowing have been exhausted.

Receiving Mrs Attah in his office, the Kogi State Chairman of the NUJ, Comr. Adeiza Momohjimoh, called on the Government, Corporate Organizations to help save the life of the mother of two.

He personally made a passionate appeal to Gov. Bello whom he described as gender friendly and a friend of the nobody, to in his usual characteristics help to save the life of Mrs Attah.

In his words, ” I’m optimistic that if the Governor gets to know about the plight of Mrs Attah, he would assist”, because he has in many ways come as a rescuer to many in such condition.

The NUJ Chairman called on Corporate Organizations like Dangote, West African and BN Ceramics located in the State to kindly help in touching a life, described the pain and plight of Mrs Attah as unbearable to bear.

Comr Adeiza said no amount is too small to contribute in saving the life of Mrs Attah, urged Nigerians to come to her aid in what ever little way they can.

Meanwhile, the Executive Director, Challenged Parenthood Initiative, Mrs Eunice Abogun has lend her passionate appeal to Governor Yahaya Bello , whom she described as gender sensitive and compassionate, Governor to help raise the money to enable her undergo the surgery in India.

She disclosed that the couple had written to her for assistance, and her Organization did not have the amount required, but , believed that Gov. Yahaya Bello as a father to the people of the state and other spirited Nigerians will wipe away her tears .

Meanwhile, all helps should be made into the account number.
* Ojone Jibrin Faith
Union Bank
0017667730,