Arch. Salman Idris has picked the House of Representatives ticket of the African Democratic Congress (ADC) for Kabba-Bunu/Ijumu federal constituency. 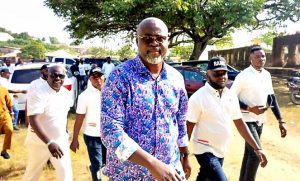 Arch. Salman emerged winner of the ADC primary election held in Kabba on Thursday after he pulled 73 votes to defeat his closest rival, Idris Rufus who had 4 votes.

Another aspirant, Tokunbo Olorundami Alaga had earlier withdrawn from the primaries before the election. He thereafter opted for the House of Assembly ticket of the party which he won with ease.

While announcing the results, the returning officer, Chief Shola Adebola, commended the delegates and party supporters for their orderly conduct.

He enjoined all ADC members to continue to support the party to win elections in the federal constituency, stressing that the party is set to replicate the same performance the people of Yagba are currently enjoying.

Addressing journalists shortly after he was declared the winner of the primary election, Arc. Idris Salman commended the leadership of the party for providing the enabling environment for them to have a hitch free exercise.

He promised to woo the electorate to deliver the party at the general elections.

Salman said his his ambition is to affect the lives of the people of the federal constituency positively.