Persons with Disabilities (PWD) on Friday visited the National headquarters of the ruling All Progressives Congress (APC) to express appreciation to the party for making nomination forms to contest for positions under the party’s platform free for PWDs. 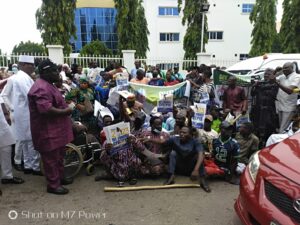 They also said they came to the party headquarters to thank President Muhammad Buhari for giving them a voice by creating a Commission for them as well as the disability law that makes it compulsory for 5% of PWDs to be employed in any government agency.

The group who gathered in their numbers at the entrance gate of the party also drummed support for Governor Yahaya Bello’s ambition to contest for the presidency.

They said the Governor had domesticated the disability law in Kogi State hence they expressed the confidence that if he wins the Presidency, PWDs matter would be his priority.

The chairman Kogi State disability board, Hon Ibrahim Daniel Arome, said the board he chairs was established by Kogi State Governor
“We want to let everybody know that the inclusion we have been yearning for can only be found in the party APC under the watch of President Muhammadu Buhari who made it possible for us to have a voice.

“Also in Kogi State, Governor Yahaya Bello has domesticated the disability law and today though on a wheel chair I live a free and fulfiled life like any other person.

“So many of us that have been so neglected by the society, APC has given us a voice, Gov Yahaya Bello who we are expecting to take over from President Muhammadu Buhari has also given us the same voice in Kogi State.

“You are seeing us in our numbers to attest to the fact that Bello believes in people like us. He is the only man who has PWD as the national coordinator of his campaign council in the history of all those aspiring to be President.

“This is the only Governor who has given automatic ticket for Ankpa 1 State Constituency to a PWD after pleading with able bodied men that were contending with him and they understood why the PWD should be in the law making business and today we have a PWD who will fly the APC flag during the next election.

He also thanked the party for giving opportunity to a PWD to represent Ankpa 1.
“It is a great joy for myself as member representing Ankpa 1, he is going to take over from me in 2023. I want Nigerians to know that the Kogi Governor Yahaya Bello is for all.

A man that is practical about inclusion of PWDs “Look at Arome though on wheel chair but Bello made him the State chairman of board on PWDs.

“I proposed this disability bill sometimes two years ago and because of the Love Bello have for PWDs, what I laboured for has come to reality.
“I have been doing a lot in my constituency, I have built houses for PWDs and I am so happy today that my constituency is going to be the first to benefit from my Labour, I appreciate APC and Yahaya Bello.

The Executive Secretary of the Kogi State Office for Disability Affairs
Barr. Zacchaus Dare Martin said they came to the APC party headquarters to appreciate the leadership of the party for harkening to their agitation to make nomination forms for People Living With Disability, PWD free of charge.

“We made a National protest asking for APC to declare forms free for PWDs and as a listening party they obliged us the request.

“Today, that has in no small measure brought major PWDs who are highly educated and politically agile to showcase their leadership capacity across the states.

“They are contesting for Senate, House of Reps and State Assembly seats because the forms are free.

“We want them to succeed. Nigeria will never go back to Egypt. Under His Excellency, Dr. Abdullahi Adamu as the National Chairman, APC will coast home to victory in all our elections.

“Another reason why we are here this morning is to appreciate the man I will describe as an angel sent to us for a special mission, His Excellency, Alhaji Yahaya Bello, the governor who over the years has given listening ears to the voice of PWDs.

“There is a visually impaired person who is Special Adviser on Media. He does this to show that he believes in their capacity to showcase their potentials.

“More importantly, His Excellency recently established Kogi State Office for Disability Affairs. It is the first of its kind, in the history of Kogi State no agency, no commission, no board has been in charge of PWDs for inclusiveness, but Bello has changed the narrative.

“He gave an agency today that is saddled with the responsibility of taking care of PWDs in Kogi state.

He said Bello has directed that 39% should be reserved for PWDs in the forthcoming employment of teachers in the State.

He said there are many of the PWDs are graduates in different fields, but because of stigmatisation, they are not given jobs.

“As we speak, the only PWD who aspired to go to Kogi State House of Assembly was given automatic ticket by Governor Yahaya Bello to run.

“He has also promised to give him all the support he needs to ensure he wins.
“It is a good omen.
Among all the presidential aspirants, Yahaya Bello is the only one that has a directorate for PWD. It means if he is finally elected Nigerian president, a new chapter will be opened in the lives of this vulnerable people with potentials. “He believes there is ability in disability.

We are here today to thank him and appreciate him for all he has done and what he is yet to do for us.
“We want to use this window to endorse him for President. We are calling on President Muhammadu Buhari to help us garner support for him because if he is elected Nigerian president he will give attention to the needy in society as he has demonstrated as a governor.