The arrival of the former Vice President of Nigeria of Nigeria under President Olusegun Obansajo administration, the Waziri of  Adamawa State, Alhaji Atiku Abubakar, as the presidential flag bearer of the opposition party, the People’s Democratic Party,  (PDP), in the forthcoming General Election, may after all serve as the herald of good notifications in the final resolution of the inflexible dispute among the rival factions in the Edo State chapter of the party. 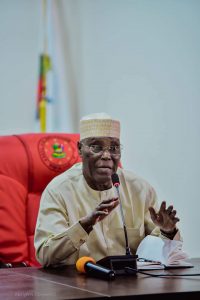 The state chapter of the PDP has been involved in an internecine dispute over which faction should exercise control of the party structure.

The Edo State chapter of the party is wringing profusely from what observers would call “political haemorrhage and attempts to “patch” things up have often resulted in  “mere window dressing”.

Governor Godwin Obaseki, immediately after the success of his re-election bid, as the leader of the party going by the PDP Constitution made several attempts to take control of the party structure   from the “old executives to replace them with what he referred to as harmonized executives.

Leaders of the old PDP members were able to successfully repel the plot, since then the party in the state is yet to experience some measure of peace and steadiness.

The Edo State ruling party was still winding in that state of chaos and confusion until it went into the serious business of electing party delegates and candidates during its primaries. This form part of the outcome of  hatred and division in the party manifested in the parallel primaries conducted by the two rival factions.

Past attempts at reconciling the rival factions have often yielded unsuccessful results.

The national body of the party at a time tried to wade in to see if it could resolve the logjam with the setting up of the Governor Samuel Ortom of Benue State Committee but in the end, the report of that committee barely dented the surface of the deeply rooted crisis.

However, the emergence of  Alhaji Atiku Abubakar as PDP presidential candidate, an old political warhorse,  may ultimately be the relaxing ointment that will compel the spiteful fighters to sheathe sword and embrace peace.

The hope of a possible and quick resolution of the inflexible Edo PDP crisis is anchored on the premise of the campaign theme of Atiku as the “UNIFIER”.

Political observers in the state are of the firm belief that the Waziri of Adamawa possesses the clout to restore peace and stability to the crisis-ridden since the majority of the power brokers in the centre of the tussle have at one time or another belonged to his political camp.

Dr. Tony Aziegbemi, Chairman of Edo State  Chapter of the  State Peoples Democratic Party (PDP) and also an apostle of unification, is one of those confident that the end is in sight as regards the crisis rocking the state chapter of the party.

His optimism is based on the emergence of Alhaji Atiku Abubakar as well as the magic wand his characteristic and influence will bring to bear on compelling the contending political forces to adopt moderate positions rather than extreme positions that tend to jerk vigorously on the heart of the party.

Besides, pundits are also of the view that Atiku’s intervention will “settle the power tussle” between the chief protagonists, Mr. Godwin Obaseki, Governor of Edo State and Chief Dan Orbih South-South Vice Chairman of the party, both of who seem to hold the ace in the crisis rocking the party in the state.

Ironically, Governor Obaseki rooted for Atiku at the last presidential convention of the PDP held in Abuja while in 2019 presidential election Chief Orbih then as the Edo State PDP Chairman delivered Edo State votes to the Atiku an indication that the duo are known to Alhaji Atiku Abubakar.

With Alhaji Atiku Abubakar now fully in the saddle, one might soon witness a  convergence of the Obaseki and the Orbih forces as a political masterstroke in ensuring the PDP does not lose Edo State to the opposition APC which is already waiting in the wings to “snatch” back a state it “carelessly lost” to the PDP in 2019 when Governor Obaseki fell out with his godfather, Comrade Adams Aliu Oshiomole and scuttled to the PDP for “salvage” and to actualise his re-election bid.