Chief Bashorun Moses Deola Eseyin, has emerged as the consensus candidate of ACCORD party in Kogi West Senatorial primary election conducted on Thursday in Kabba. 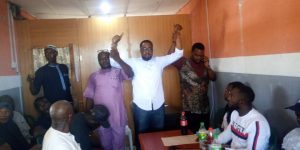 Also, Mr Oluwabusayo Alonge and Dr Slyvanus Seun, were both affirmed as the party‘s House of Representatives’ Candidates for both Yagba and Kabba/Bunu-Ijumu Federal Constituencies respectively.

In his Acceptance Speech, Chief Eseyin thanked the party leadership for giving them the platform to constest in the forthcoming elections, saying it was a great honour.

According to him, ACCORD is the only platform that gives room for the youths to contest and exhibit their talents; the era we are now is for the youth.

Eseyin, a former Special Adviser to Governor Yahaya Bello on Youth, Sports, and Students’ Affairs, stressed that the youth constitute the only demographic that could unite the entire country, and represent the voting populace.

”I have done it before while I was the Special Adviser to the Governor on Youth Sports, and Students’ Affairs, and I promise to do better.

”I believe by the time I am elected by the grace of God come 2023, I will ensure a better legislative representation for the betterment of the people of Kogi west.

He restated his determination and commitments to implement the Kogi Youth Ageda for all.

Also speaking, the State Secretary of ACCORD party, Isaiah Felix, said the presentation of a consensus candidates was a unanimous and collective decision of the delegates and party leadership.

Felix advised the electorates not to sell their votes and should not be intimidated or frustrated but to cast their votes for candidates with competence and capability to perform.

”By the grace of God, ACCORD party is second to none as far as Kogi State is concerned and victory shall be ours at the end of the day”, he said.

The INEC Official, Alh. Sadiq Zakariyawu, who observed the process, commended the party leadership for conducting the election in line with the Electoral law.

He stressed that the process was free, fair, credible and acceptable by all.