The Managing Director, CEO of PFTN Nig. Ltd, Amb. Gabriel Enemona and President of Enemona Foundation said he  has dragged Sahara Reporters to court, demanding the sum of N100million for damages. 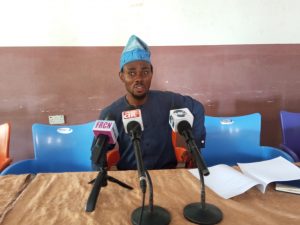 Amb. Gabriel Enemona made the disclosure at a press conference on Wednesday in Lokoja, said following an injurious and false publication by Sahara Reporters on March 31st 2022, his image and businesses has suffered collosal loss.

The Managing Director, CEO of PFTN Nig. Ltd, Represented by Barr. Salifu Oguwche Usman, of Rise Rise Andrew Adejoh, a firm of solicitors, said they have given notice since 10th May, 2022 demanding Sahara Reporters to retract the publication.

He however lamented that steps are ongoing at the federal high court by a legal team to file processes against Sahara reporters after a reminder was sent to them on 26th May 2022 upon failure to retract the said story.

While pointing out that following the failure to retract the story which he noted has caused damages and affected his businesses, he is dragging Sahara Reporters to court, has filled for damages of
N100m.

He said the publication by Sahara Reporters has defamed his character in the eyes of the public and negatively impacted on his businesses, explained that Sahara Reporters missed the point by mistaking his name to have a semblance with that of the Kogi State Deputy Governor.

While noting that Sahara Reporters didn’t do due diligence and verification before publishing its story, explained that the Managing Director, CEO of PFTN Nig. Ltd, was at no time a front.

While noting that the Managing Director, CEO of PFTN Nig. Ltd, was into business relationship With Olewole, with an agreement to make monthly returns on investment to the tune of twenty Eight million, which he has paid up as at 31st January, 2022.

He, however, lamented that in February, 2022, things took a new turn in the coal business, owing to the cost of diesel, explained clearly that rather than using civil means as expected in the spirit of business, his partner resorted to Police harassment.