May 31, 2022 There was no APC Primaries in Kogi Central Senatorial District - Hajia Ramatu Tasalla Shehu 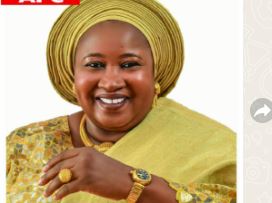 Hajia Ramatu Tasalla Shehu an Aspirant in the just concluded APC Primaries in Kogi Central Senatorial District has said there was no primaries conducted in the district.

She dissociated herself from what she described as a Kangaroo Primaries, said she would head to the Appeal Committee, pointed out that the returning Officer, a political Appointees, had bridged the rule making the election unlawful and unconstitutional.

In a press conference held at the NUJ Press Centre, Hajia Ramatu represented by Yusuf Adeko Abdulkadir, said the election cannot stand, urged the APC to be prepared to conduct a new primary.

She described the activities of the Congress as a selection and not an election, said what happened at the venue of the primary election was what obtained in the animal farm.

She said no accreditation was held, she was never allowed to meet with the delegates, lamented how Alhaji Yahaya Karaku, a Political actor from the district could be made the returning Officer.

She called on her teeming supporters to remain calm despite the obvious manipulation, asked for a level playing field for the people to choose their preferred candidate.

She disclosed that in her estimation, no Primary was held in Kogi Central, described the results published in the Social media as fictitious and laughable with imaginary votes allocated.