* Recognised with Award of “Influential Kogities 2022” 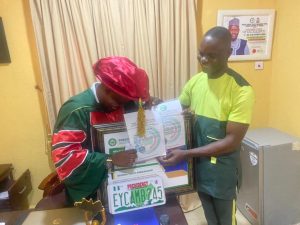 In recognition of his giant stride in youth engagement, empowerment and humanitarian services in the country, the Founder of Tazan Onimisi Saahibfatiu Foundation has been appointed by the West Africa Youth Council (WAYC) as ‘ West Africa Youth Ambassador’.

The event which took place at his office in Okene was attended by the representatives of WAYC, Mayorkings Agency Group, staff of the Foundation, friends and well-wishers.

Speaking with newsmen at the venue of the event, the President/Chairman of WAYC, Amb. Emmanuel William congratulated Amb. Tazan as he noted that his achievements made the selection process easy for the Council.

He disclosed that the office of the Presidency, West African Youth Council also presented the Nelson Mandela Leadership Award Of Excellence And Integrity To Amb. Tazan Saahibfatiu Onimisi As ” ECOWAS Youth Ambassador.

This award from ECOWAS he stressed is an outstanding recognition due to his humanitarian services, his great effort as a young selfless leader of high repute with a difference, a philanthropist, hardworking and goal-oriented individual with passion for youth and societal development.

In addition to his award and appointment, Amb. Tazan was also given a Certificate of Allocation for a Diplomatic Car Plate Number and a working Identity Card.

He further urged him to continue making humanitarian impact, while encouraging youths in the society to strive in making an impact on their environment and be a promoter of peace.

Similarly, in line with his international award, Amb. Tazan was equally recognized with an award as ” The Influential Kogities 2022 by Mayorkings Agency.

Speaking at the event, the President and Founder of Mayorkings Agency Group, Amb. Temisan Louis stressed that Tazan has become a household name due to his all-around achievements across various sectors of society.

He added that his face was not known to the people, but his works through his Foundation are what qualified him for the award and recognition.

Amb. Temisan congratulated him and urge him to continue to do more for the society and not relent.

Earlier in his speech, the founder of Tazan Foundation, Amb. Tazan Onimisi Saahibfatiu while expressing his profound gratitude to God for the grace to impact life, thanked the two bodies for the recognition.

According to him, helping the needy has been part of him from childhood and a culture he learned from his parents, adding that he capitalised on the blessings from Allah to impact more heterogeneous people within and across the state.

He however promised to continue impacting the lives of the needy, while stressing that the appointment and awards are a morale booster for him and his staff to do more.

While dedicating the awards to his parents and staff of the Foundation, he encouraged youths who are well placed in the society to invest more in humanitarian services, to alleviate those in extreme poverty to a good healthy lifestyle.