*Says Atiku’s running mate should come from the South

The Chairman, Board of Trustees of the Peoples Democratic Party (PDP), Senator Dr. Walid Jibrin, has described the emergence of Alhaji Atiku Abubakar, as the 2023 presidential candidate of the PDP as a good development that will facilitate the fortunes of the party. 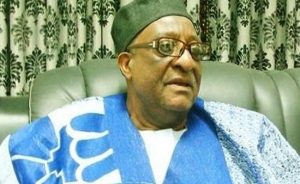 In a statement on Monday, he said Atiku’s success at the PDP presidential primary has opened a good way for all Nigerians to elect the Nigerian President in the 2023 general election.

He also said the BoT will assist the party and ensure that Atiku picked his running mate from the southern part of Nigeria.

Atiku became PDP’s presidential candidate on May 28 at the just concluded PDP presidential primary at the MKO National Stadium at the Federal Capital Territory, Abuja.

He polled 371 votes to defeat his nearest rival, the Governor of Rivers State, Nyesom Wike, who scored 237 votes.

Jibrin said, “The election of Atiku Abubakar as the presidential candidate of our party (PDP) is a big success to the party and of course a good omen for all Nigerians. Atiku’s success at the recently concluded PDP primaries has opened a good way for all Nigerians when it comes to the 2023 general election to elect the Nigerian President.

“We must remember that Atiku was earlier elected at PDP primaries at Port Harcourt in 2019 but was nakedly sabotaged by the All Progressives Congress through unholy way. We must remember the good performance of Atiku as Vice–President of Chief Olusegun Obasanjo. Our party must be fully congratulated for playing a good role and of course all our delegates across the 36 states and the Federal Capital Territory(FCT).

The BoT also congratulates Senator David Mark and the whole of his committee for organising one of the best electoral national conventions after the Port Harcourt convention chaired by Governor Ifeanyi Okowa of Delta State in 2019.

My advice as the PDP BoT Chairman, the conscious of the party, is that we must come together as one entity, fully together as one party, talking with one voice to make our party the greatest not only in Nigeria, West Africa but the greatest in Africa with no any differences in tribe, section or religion.

“Atiku will be Nigerian President and never a tribal or any religion President. Finally, the BoT will assist the party and surely the Wazirin Adamawa himself to come out with a very acceptable Vice President from southern Nigeria. Thank you all and God bless.”