Oshiomhole Has Proven His Worth In Just Concluded Party Primaries – ANAMERO

May 30, 2022 Oshiomhole Has Proven His Worth In Just Concluded Party Primaries - ANAMERO

The candidate of the All Progressives Congress APC, Etsako Federal constituency, Mr. Dekeri S. Anamero (DANCO) said Comrade Adams Aliyu Oshiomhole have proven to the people that he is a force to be reckon with in the politics of Edo state and Nigeria in general with his election. 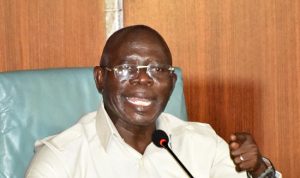 Anamero made the statement while congratulating Oshiomhole in his victory at the recent APC party primaries to elect candidates for the 2023 general elections.

Oshiomhole on Saturday emerged the Candidate of the APC in Edo North Senatorial District.

He said, “l congratulate Comrade Adams Aliyu Oshiomhole over his emergence as the standard flag bearer of the All Progressives Congress, Edo North Senatorial District”.

The overwhelming support given to you across the senatorial zone is a reflection of people’s perception about you and the love they have for you.

Your emergence is a victory for democracy.

May Almighty God crown our effort in the forthcoming general elections to continue the good work for our people.