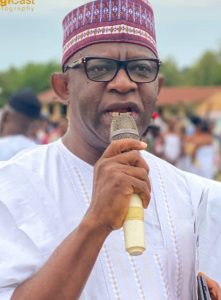 The Lawmaker made the disclosure in a statement while speaking to congratulate Hon. Karimi on his victory, thanked the people of Kogi West for standing up for Hon. Karimi at the just concluded primary.

The House of Assembly member said the emergence of Hon Karimi is in the interest of justice, fairness and equity, praised the courage of the APC delegates for voting massively for him as the party‘s flagbearer.

He urged the people to sustain their support for Hon. Karimi assuring that he has all it takes for the development of Kogi West Senatorial District through robust legislative engagements.

He congratulated Hon. Karimi on his landslide victory in the most freest and credible primaries held by the APC, assured him of the support of the Progressives in making the general election won by the Grace of God.