Hon Leke Abejide, member of House of Representatives, representing Yagba Federal constituency has emerged as the flagbearer of the African Democratic Congress (ADC) in the federal constituency, ahead of the 2023 polls. 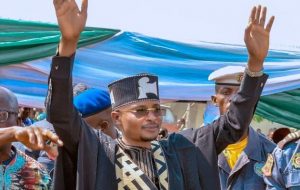 Out of the 170 delegates of the ADC who gathered to elect the party’s flagbearer for the 2023 election in Yagba Federal Constituency, the Chairman, House Committee on Customs and Excise, made a clean sweep of the primary election. He scored 168 votes.

The remaining two votes were invalid.

The Returning Officer, Dr Peter Ede from the ADC national secretariat, Abuja who announced the results described the exercise as peaceful, transparent and historic.

Polling agent of Hon Abejide, Mr Bode Olorunsola told our correspondent that he was not surprised at the outcome of the ADC primary election in Yagba based on what Elder Abejide has done during his first term, which he described as unprecedented.

“I have no doubts in my mind that he will do better if given the opportunity to serve another term”, he said.