The ruling All Progressive Congress flag bearer in Kabba/Bunu/Ijumu Federal Constituency and the current Speaker of the Kogi State House of Assembly who emerged victorious at the just concluded party primaries held last week in Kabba, Rt. Hon. (Prince) Matthew Kolawole has paid homage to the Obaro of Kabba and Chairman, Okun Area Traditional Council, His Royal Majesty, Oba Solomon Dele Owoniyi yesterday to seek for his royal blessings and support. 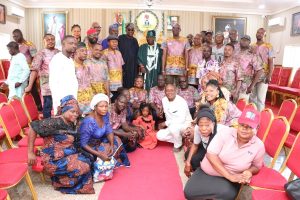 The Speaker went to the palace with a large number of his supporters, most of whom are the executive members of the ruling All Progressive Congress across the thirty wards of the Federal Constituency and some stakeholders who were on hand to show their solidarity.
Speaking at the palace, the State Lawmaker commended the purposeful leadership of the Monarch which has impacted positively on the overall development of not only Kabba community but the entire Okun nation.

He apologized on behalf of his campaign team for not been able to visit him before the party primaries, stressing that it is due to unforeseen circumstances occasioned by situation in the country which could not allow the leadership of the party to resolve some issues relating to the electoral laws. He noted that it is usually his practice to seek royal blessings and support before embarking on any contest.

Kolawole said on no account would he allow anyone to come in between him and the Royal Father, stated that he acknowledged his monumental support for him in 2015 long before he was crowned as the Obaro of Kabba and again in 2019 when he personally mobilized the community to support him and the party which gave him an overwhelming victory at the poll, for which he will ever remain grateful.

According to him, he was in his palace to seek for his royal blessings, support and cooperation as they move toward the 2023 general elections, pointed out that it will be an added advantage for him and the constituency when he gets to the national assembly because he will not be regarded as a fresher rather he will be a ranking member haven served at the state level as the Speaker.

He urged the community to continue to support the Royal Father in maintaining peace and tranquility in the community, saying security is everyone’s business.

Responding, Oba Solomon Dele Owoniyi congratulated the Speaker on his emergence as the APC flag bearer in the constituency, urging him to be magnanimous in victory and also carry along others who contested with him.

He said as the Obaro of Kabba, he will continue to preach peace and development of not only Kabba community but the entire Okun land while appealing for decorum in all whatever anyone is doing, pointing out that the security of lives and properties of the people is more paramount to him, hence he will continue to enjoin all and sundry, be it politicians or not, not to engage in any activities that may heighten the security tension in the community.

He urged the political parties in the area to organize themselves in such a way that will promote peace and rancor free contest, saying that in any contest someone must emerge instead of situations as witnessed recently and commended the speaker for the last security meeting held in Kabba recently.

Highlight of the visit was the Monarch offering prayers for the Speaker to be victorious in his political journey and group photograph.

Earlier, the Speaker was in Christ Apostolic Church, Aiyeteju Headquarters and Cherubim and Seraphim Church, Odolu for thanksgiving service on his emergence as the APC flag bearer.

Femi Olugbemi,
CPS to the Speaker