Comr. Omonu Joshua, Immediate past Senior Special Assistant on student affairs to Gov. Yahaya Bello has called on the APC to see Gov. Bello as the only alternative for the party to defeat the PDP Presidential flagbearer, Alhaji Abubakar Atiku. 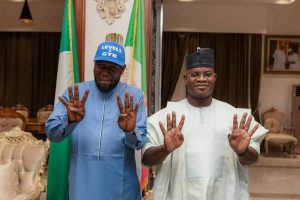 The former Governor’s aide in a statement issued to Newsmen, urged the APC to look in the direction of Gov Bello, pointing out that he is the best to deliver the country and the party in 2023.

Comr Omonu aka Levels Pumping, said with the wide acceptance of Gov. Bello by Nigerians, he will trash the PDP Presidential flagbearer with ease.

He disclosed that Gov. Bello’s acceptance by the youths and women folk who constitute the majority of voting demographics, places him as best alternative for APC.

He called on the party not to toy with the destiny of Nigerians by not adopting Gov. Bello as a consensus, described him as the best bet for the APC.