Former youth leader of the All Progressives Congress (APC) Valentine Owamagbe Asuen on Saturday defeated Edo state former Deputy Governor, Lucky Imasuen to emerge as the APC candidate for the House of Representatives in the general election 2024. 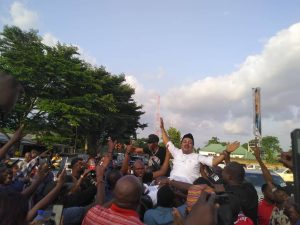 He scored 216 votes to defeat his opponent, Mr. Lucky Imasuen, a former Deputy Governor of Edo State under Osariemhen Osunbor who scored 159 votes.

Lucky Imasuen who seems to have pre- meditated his failure turned himself into Security agent as he denied Edo state accredited journalists from entering the election venue.

As the Journalists battle to enter the hall , Imasuen stood by the door telling Police men not to allow them inn .

Despite the intervention of the APC Youth leader , Comrade Tony Kaba who went on his kneels begging that journalists should be allowed into the venue,the Police men and Lucky Imasuen stood their ground and refused them entering.

At the end of voting , Valentine Owamagbe Asuen came out victorious with 216 votes to beat Lucky Imasuen who had 159 votes .

The Chief Executive Officer of DVD Oil Limited, Saint Valentine Asuen, has now emerged the candidate of the All Progressives Congress (APC) for Edo South Senatorial District in the forthcoming 2023 election.

The Senatorial primary took place at the Indoor Sports Hall of the University of Benin (Uniben), Ugbowo, Benin City with delegates from Edo South duly accredited to vote aspirant of their choice.

Reacting to the victory, Asuen thanked God Almighty for the resounding victory and appreciated the youths for their encouragement and support.

According to him, “my victory is an attestation to the fact that the youths still believe in themselves , a sign that they can dictate the pace of Nigeria election by their unification to retire the old politicians.” he concluded.

Mr. Asuen, said that he came into the contest with the “desire to effect development and quality representation of the district.”

He has promised to sponsor people-oriented bills, and empower the youths and women in Edo South.

Mr. Asuen, a successful businessman, and former APC youth leader of APC, had also promised that he would also channel his energy to quality representation.