The All Progressives Congress Candidate for Kogi West Senatorial District in the just concluded primary election in kogi state, has promised to ensure effective and people orientated legislation. 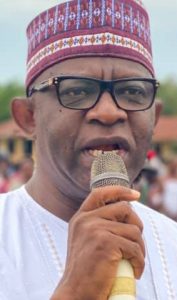 Hon. Karimi made the disclosure following his declaration as the APC Candidate following his victory at the party‘s Primaries held in Kabba today, promised genuine people orientated legislation that would improve the lives of the people and enhance development of the Constituency.

Recall that Hon. Karimi represented Yagba Federal Constituency between 2011 to 2016 at the House of Representatives.

The flagbearer assured of his preparedness to serve and bring about the much desired change that would positively impact on the senatorial district and the people.

He described the election as one that made all contestants winners, noting that the victory belongs to God and the people.

Hon. Karimi extended his hands of fellowship to all the contestants said he would reach out to other contenders, saying the exercise and his emergence was a ‘no victor, no vanquished’ victory for the people of Kogi West Senatorial District.

Hon. Karimi thanked the party delegates for supporting and voting him said, he would not disappoint or betray the trust repose on him, urged for collective working together to make Kogi West meet the yearning and aspiration of the people of Kogi West Senatorial District.