The aspiration of Engr. (Dr) Abubakar Ohere to represent Kogi Central at the red chamber of the National Assembly on Saturday became manifest as his candidature to fly the party’s flag in the next general election was sealed with 260 Votes after mauling the duo of Barr. Ramatu Attah and Alh. Dalhatu Sheriff who were his contestants in the peaceful election. They polled 13 and 11 votes respectively to clinch runner up and second runner up. 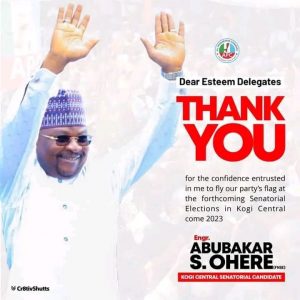 Engr. Ohere’s victory at the Party Primaries was a reflection of the affection the good people of Kogi Central has for the superb administrator and reliable politician which was not only borne out of his selfless services to the people but his benevolent posture.

Engr. Ohere’s philanthropic nature and humanistic attitude are some of the qualities that stand him out and of course, has reaped exactly what he sowed. That is, Engr. Ohere is benefiting from those he had benefitted.

As we continue to pour felicitation messages to the capacity Kogi central leader Engr. (Dr) Abubakar Sadiku Ohere on his well deserved victory today, we appreciate the ever submissive delegates from the five local governments of Kogi central for their integrity who by their own volition stood on the side of truth. Their goodwill will surely be reciprocated by the People friendly and God fearing leader.

For the seamless, transparent and credible Party Primaries held in Kogi Central today, we commend all the critical Stakeholders and security agencies for creating the enabling environment that led to the success of the intra-Party polls.